Brutal knockout: Muhammad Ali’s grandson overwhelmed his rival in one round 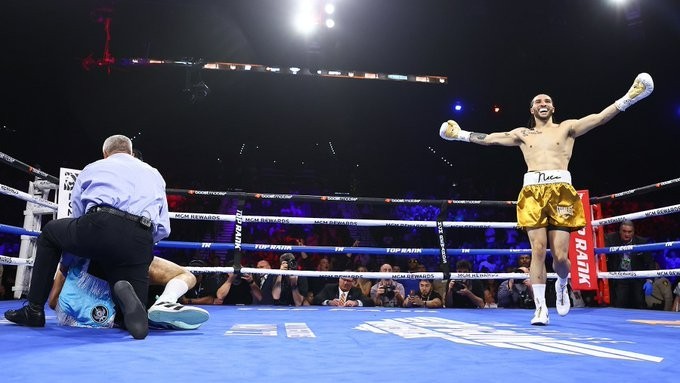 Nico Ali, grandson of Muhammad Ali, knocked him out in one round. Twitter: @NicoAliX74ANDThis Saturday in Las Vegas, Nevada, an unusual event took

Nico Ali, grandson of Muhammad Ali, knocked him out in one round.
Twitter: @NicoAliX74

Nico Ali Walsh, grandson of legendary boxer Muhammad Alientered the ring to face Alejandro Ibarra, within the evening in which the main event was the duel between Oscar Valdez and Shakur Stevenson for the unification of the super featherweight titles.

However, the audience was excited, as heir to the heavyweight legend of the 1960s gave an excellent display of offensive power and in less than three minutes to overwhelm his opponent.

At 21 years old, Nico Ali achieved his fifth professional victory with a brutal knockout in the first round; in his nascent career he has won four fights before the deadline.

From the beginning of the fight, the lanky boxer not only showed that he knows how to stand well and move his waist to avoid the blows that are thrown at him, but also that he presented interesting counterattacks through a variety of combinations showing a lot of hard work of preparation.

Ace, With less than 20 seconds left in the first episode, Ali punished Ibarra and through a combination of left hook and right he left him unconscious even before he fell to the canvas, so referee Russell Mora did not even give him the protection count declaring the overall winner.

As soon as the public realized the power that Nico Ali hides in his fists, immediately began to chant Ali, Ali, Ali, Ali, a name that despite the death of Muhammad Ali, people still remember.

Excited to achieve his fifth victory in as many fights, Nico Ali Walsh could not contain the desire to give his performance to his grandfather, who lost his life in 2016.

“This is just a testament to all the work I’ve put in. Things like this happen when you work hard. I’m bringing my grandfather back to life, and that’s why mom is so excited, because she gets to see her father again and hear his father’s name before me,” he said.

Loading...
Newer Post
Old Warriors rockers send a message in Memphis
Older Post
Warriors win a spectacular game in the first of the series vs. grizzlies