Bujalance and his 25 years of passion for futsal 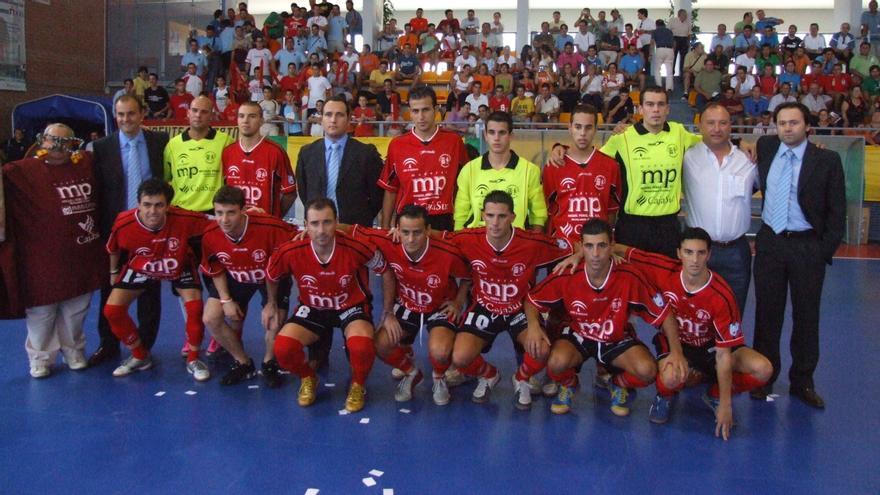 futsal in Bujalance You are in luck, as you celebrate 25 years of history, passion, joy, emotions and also sadness. There are ma

Bujalance and his 25 years of passion for futsal

futsal in Bujalance You are in luck, as you celebrate 25 years of history, passion, joy, emotions and also sadness. There are many players, coaches, directors and the numerous fans who together have made the futsal team, the current CD Beconet FSthat it be a benchmark for this sport in the province of Córdoba and Andalusia and continue to grow game by game and season by season, with the same enthusiasm and the same vigor of its beginnings.

This Friday September 2 will be held at the Bujalance Spanish Theater this 25th Anniversary, as if it were a gift. The act comes to pay tribute to so much effort, struggle and dedication to some colors, to the red of the team and to toast 25 years of passion, of shared joys, in short, futsal with capital letters. There, the history of the club and the anthem will be relived, the club’s new emblem will be explained, commemorating the anniversary, and there will be the presence and testimony of former players and former coachesalong with the current CD Beconet FS template.

The CD Beconet FS celebrates this anniversary together with its unconditional and enthusiastic fans, with the “Front device” at the head that filled the pavilion every game with 700 and even 1,000 spectators, the most numerous attendances in Andalusia, and that has always been there for the hard and the mature, hoping to achieve great achievements this season to celebrate this anniversary as the club deserves.

This entity was chaired from the beginning and until 2010 by Miguel Perez Pozuelo and from then until now he is at the head of the entity, Jose Romero Castillejo “Pepito”, who on the occasion of this anniversary declares: “I am proud to have been president for all this time. It has been a period of hard work, sacrifice, but above all, a team has been built between all the people who make up this family: board of directors, players , coaching staff, fans, sponsors, institutional bodies such as the Andalusian Government, the Córdoba Provincial Council and the Bujalance City Council”.

“One of the achievements of this period in which I have been president has been to keep the team in Second Division B, except for those years when we went down to Third Division, but recovering the category the following year. I especially remember that game against Alcalá in full pandemic. I lived through it with a lot of nervousness given the circumstances and especially because of how it was resolved, in an agonizing penalty shootout. Now we look to the future with optimism, and with the peace of mind that, if we continue to do a good job, we can go back to achieve great achievements,” he says.

Great players have come out of this team who have played in the best clubs of the highest category and even in the national team of Faith Vidal -who was coach of Bujalance-, highlighting among them the bujalanceño Francisco Solano.

The team celebrating the conquest of the Andalusian Cup. CORDOVA

Throughout these years many sporting challenges have been overcome and Bujalance has enjoyed vibrant confrontations against great rivals, in the League and Andalusian Cup and numerous friendly matches against teams as important as Inter Movistar or the Brazilian team.

Outside the sporting sphere, in 2006, the singer and world star Camilo Sesto composed the “Himno al deporte bujalanceño”, whose profits he gave to Bujalance and which was presented at the Alcazaba Castle in Bujalance before more than 3,000 people, to later the kick-off on the day the anthem was heard for the first time in the José Pérez Pozuelo pavilion. A song that has been, is and will be recognized in any corner of the planet where it is heard.

As for this season, 2022-23, CD Beconet, which will play in Group 5 of Second Division B, is made up of goalkeepers Jesús Muñoz and Nono Castro and players Jesús Medina (captain), Jesús Flores, Pedro Catiti , Antonio Catiti, Adri Luna, Rafalete, Boyos, Manu Leal, Carlos Borrallo, Koseky and Cristóbal. For its part, the coaching staff is made up of coach Fermín Hidalgo, Juanjo Almagro as second coach, and goalkeeping delegate and coach Iván Rueda, with physical trainer Sergio Cárdenas.

The history of this club, which is called CD Beconet Bujalance FS, begins in 1996, when the Aguaero Pub Sports Association Futsalwho militated in regional competitions and provincial marathons.

In August 2001, with the roots of Pub Aguaero FS, a board of directors was formed with a new path, under the name of Woods Miguel Pérez Bujalance FS.

As Bujalance already had a pavilion, he was able to participate in the provincial futsal league in the 2001-02 season, brilliantly proclaiming himself champion of the league and obtaining promotion to the 1st National B (current 3rd Division) and also winning the Andalusian Championship in Herrera. (Seville). The following year, the 2002-03 season, they were promoted to the 1st National A (current 2nd Division B) after winning a play-off against the champion from Melilla. In 2003-04 they also managed to ascend to the Silver Division (current 2nd Division) after finishing at the top of the classification. Three consecutive promotions brought the team close to the elite.

In the Silver Division, in its group A, in the 2004-05 season, he paid for the hazing of playing in such a powerful category and ended up in relegation positions. But for non-sporting reasons he kept the category and the following season, 2005-06, he formed a solid project, with the current national coach Fede Vidal at the helmfinishing in a meritorious 8th place.

Camilo Sesto in the kick-off at the presentation of the Bujalance Sports Anthem. CORDOVA

In September 2006, under the cameras of Canal Sur TV, the III Futsal Cup of Andalusia was held in Bujalance, coming out champions of said tournament after beating Torremolinos in the semifinals and Clipeus Nazareno FS in the grand final.

During the 2006-07 and 2007-08 seasons, in the Silver Division, they achieved a very worthy 7th and 5th place, which left the team one step away from playing in the play-offs for promotion to the Honor Division, with young players and projection, along with top-level Brazilians.

In the 2008-09 season, Maderas Miguel Pérez FS finished 2nd in the regular league, being the best classification in its history, fighting to be among the best in Spain in the Division of Honor. However, he did not achieve the goal. As of that season, the economic crisis began to make a dent.

In the 2009-10 season, the name of the Maderas Miguel Pérez FS changed to that of the CD Bujalance Calderería Manzano FS and he fought worthily in Silver saving the category. But as of 2010-11 he gave up playing in the Silver Division for financial reasons and was relegated to the bronze category. A 1st National A that the following year would be restructured, calling itself 2nd Division B, and competing against rivals from Andalusia, Ceuta, Melilla, Extremadura, Castilla La Mancha, Valencian Community and Murcia.

Once again immersed in the bronze category of national futsal, they began to compete according to the resources they had. Since that season he played at a good level, dominating the upper-middle zone of the classification. In the 2012-13 season he was about to occupy the 3rd place that would have allowed him to play the Copa del Rey the following season.

But every time things got more difficult, being the 2014-15 season and the following two very complicated, descending to the Third Division in the 2016-17 season.

The following year, in the fourth category, he formed a new project with the more than clear objective of climbing to 2nd B, fighting against teams from Eastern Andalusia. The season was very positive, achieving the 2nd position and therefore that long-awaited promotion to the bronze category. However, the joy lasted a year as it went down again after a very unlucky season.

Thus, in the 2019-20 season, and again in the Third Division, but now in the Western Andalusia group, the challenge was once again to move up in category. The season was amazing, being league champion with an 8 point advantage over the second classified. The long-awaited promotion was achieved in a very intense and even play-off that was not resolved until the penalty shootout. Thus, Bujalance returned to the place that history minimally deserves.