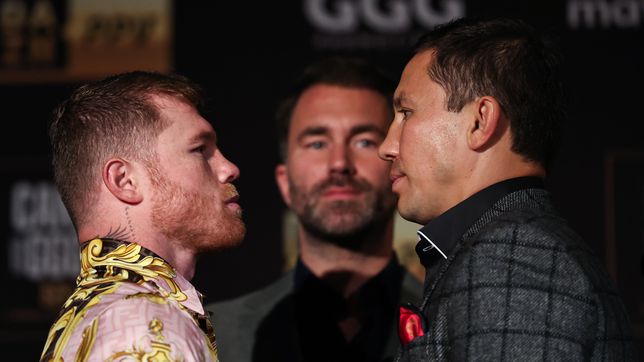 Despite exchanging blows in each of the 24 rounds in which they have faced each other, Saúl Canelo Álvarez and Gennady Golvkin still think they can

Despite exchanging blows in each of the 24 rounds in which they have faced each other, Saúl Canelo Álvarez and Gennady Golvkin still think they can offer something different to the fans in the closing of the trilogy.

The bitter antagonism that the Mexican and the Kazakh feed day after day, will escalate several degrees more on September 17 at the T-Mobile Arena in Las Vegas.

I am very happy to bring you the best fights and this will be no exception. #CaneloGGG3 this September 17th 👊🏻🇲🇽 Headquarters to be confirmed.

I’m really happy to bring you the best fights and this one will be no exception. #CaneloGGG3 this Sep 17th 👊🏻🇲🇽 Venue to be confirmed. pic.twitter.com/ow26TlWrmX

Canelo hopes that the third confrontation will not only be the culmination of the rivalry with GGG, but also the goodbye of his opponent’s professional strings.

In an interview he gave to the BBC in London, Canelo emphasized that he intends to end Golovkin’s career.

On multiple occasions, Canelo has pointed out that GGG, in addition to being a sporting challenge, represents a personal matter.

Maybe it may interest you: Dmitry Bivol and Zurdo Ramírez will fight on November 5

In addition to the controversial decisions of the judges (tie and Canelo’s victory), in the previous lawsuits in which Golovkin has said that the beneficiary has been the Mexican, the Kazakh has repeatedly mentioned a six-month doping suspension that the Mexican served. in 2018.

“It’s personal because he’s talked about a lot of things about me all these years, so it’s personal to me,” Alvarez says.

“When he’s in front of me, he doesn’t say anything, ‘I respect him, I respect his career and this and this,’ but what about what you’ve been saying in interviews and elsewhere?”

Unlike the previous two matchups, Álvarez expects the trilogy to close with a knockout.

No plans to hang up the gloves

The third fight with Golovkin will be Alvarez’s 62nd pro fight, as he started his career at 15, but has no retirement plans yet.