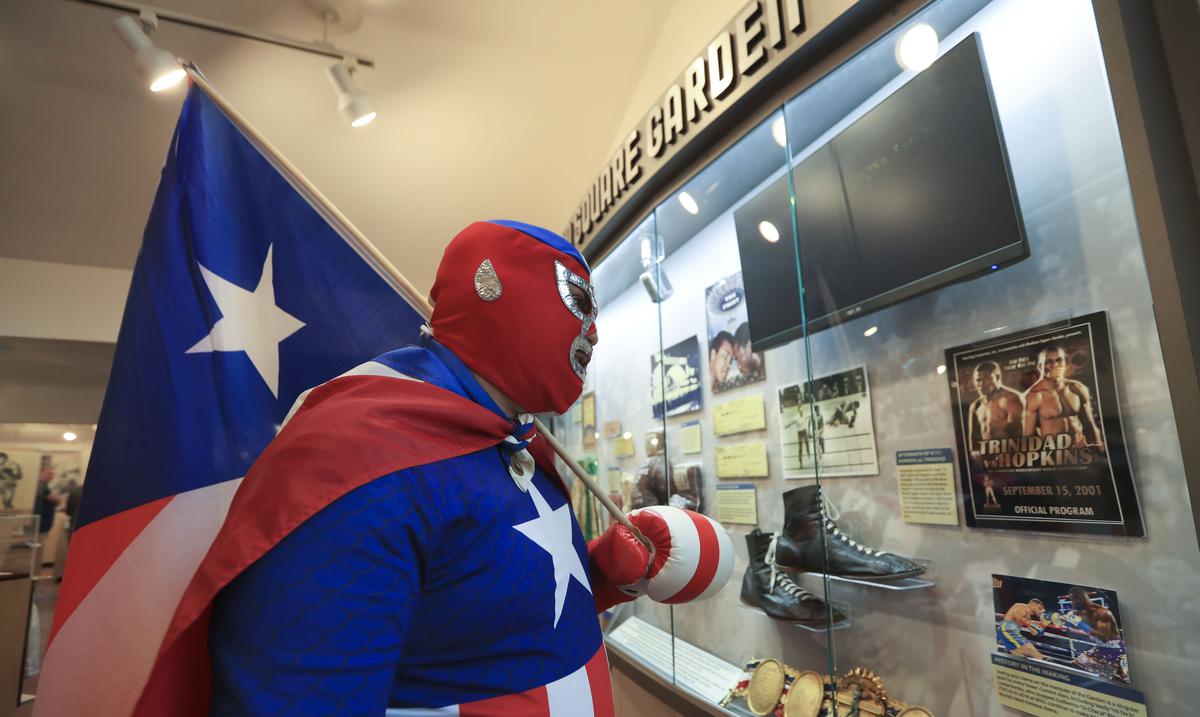 Basket, New York. It was not even 11 in the morning, when the Boxing Hall of Fame Museum was already buzzing with activity with people who came to

Basket, New York. It was not even 11 in the morning, when the Boxing Hall of Fame Museum was already buzzing with activity with people who came to the emblematic facility to admire all the memorabilia that are exhibited in the small enclosure.

At the moment, a man dressed from head to toe with pieces that exhibit the Monostarda made his entrance.

His name when he wears civilian clothes is Carlos Ramos. When he assumes his other personality it is “Cap Bori”, the one who was born in 2014 to support Félix “Tito” Trinidad in his exaltation ceremony and has not stopped doing it with all the Puerto Rican fighters.

“I always watched boxing since I was little with my older brother and my old man, and the Mexicans had (a character) that had a ‘skull’ (skull), like a dress. I said to myself: ‘If Puerto Ricans had someone.’ When I came for the exaltation of Tito Trinidad in 2014, I dressed like this and all the Puerto Ricans told me ‘you look good,’ ‘I want a portrait,’” shared the man from Aguadilla, but a resident of Syracuse, New York.

From then on, and despite the fact that his children had initial reservations with his father’s idea, Ramos has not stopped wearing his “Cap Bori” costume on billboards where there are Puerto Ricans and he will do so this weekend during the exaltation of Miguel Cotto as part of the 2022 Class of the Boxing Hall of Fame. A sign welcomes the public to Hall of Fame activities this weekend. (VANESSA SERRA DIAZ)

The four-time division champion will be recognized as a boxing immortal this coming Sunday, alongside members of the Classes of 2020 and 2021, whose ceremonies could not take place until now due to the COVID-19 pandemic.

Ramos explained that the mask he wears, which has the colors of the national flag and a single star in the center of his forehead, was bought online. She had a lot of stars, but he took them away so there would be one.

In addition to the mask, Ramos wears a shirt, boxing gloves and socks with the flag. He wears sneakers with the colors blue, white and red.

“I bought the mask ‘online’. You know, people don’t want to see my face,” she said with a laugh. “The mask had a lot of stars, and I took it to have them removed, except for one so that it had a star like the one on the Puerto Rican flag,” added the 44-year-old man, noting that thanks to his initiative, He has had the opportunity to meet multiple boxers.

As for Cotto’s exaltation, he couldn’t have been happier.

“I am very proud of Miguel. He had a historic career,” he stipulated. “Always humble and professional. He represented us well, and it makes me happy to see his story. This is something that is history and is for life. I am very proud of him, ”she pointed out.