Carl Nassib will donate $100,000 to the LGBTQ Foundation 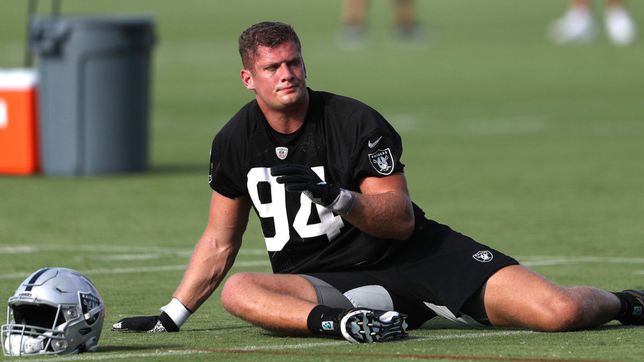 Carl Nassib, free agent and former Las Vegas Raiders player, is the only active member of the NFL to be recognized as homosexual and will now suppo

Carl Nassib, free agent and former Las Vegas Raiders player, is the only active member of the NFL to be recognized as homosexual and will now support the LGBTQ cause financially.

Through his Instagram account, the free agent announced that he will join The Trevor Project. The defender pointed out that he will match donations up to the sum of 100 thousand dollars. When Nassib revealed his sexual orientation a year ago, both the league and the Raiders also pitched in to organize.

“I want to wish everyone a happy Pride month. I also want to remind you why Pride is important to me. Right now there are kids saying ‘I’d rather be dead than gay’ and that’s why I’m partnering again with The Trevor Project to donate up to $100k,” Nassib said in his post.

The Trevor Project is a non-governmental organization that offers a hotline focused on mental health and suicide prevention for lesbian, gay, bisexual, transgender and queer youth.

YOU MAY BE INTERESTED: NFL will decide Watson’s sanction prior to training camp

The defensive end came to the NFL in 2016 as a third-round pick with the Browns. After two years in Cleveland, Nassib was released and the Buccaneers claimed them off waivers. In March 2020, after playing two years in Tampa Bay, the Raiders signed Nassib to a three-year deal for $25 million. After two seasons, the pass rusher was cut by the Las Vegas team.

For life, the Penn State product has appeared in 86 regular season games and has 164 tackles, 39 for loss of yards, 22 sacks, 16 deflections, four fumble recoveries, a forced fumble and an interception.

these are all the premieres of november
Vince Lombardi Trophy will be in Mexico; knows dates and places
Summary of Buffalo Bills vs Tennessee Titans, Week 6 of the NFL
NFL 370