Carla Esparza got married; she walked down the aisle with the UFC belt 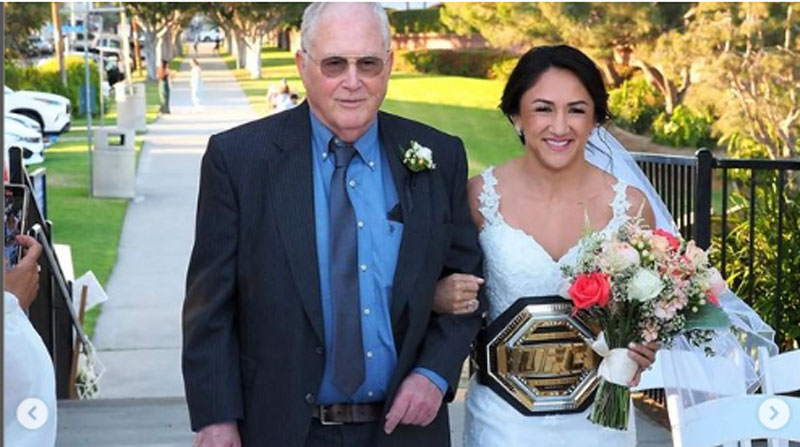 UFC champion Carla Esparza as she walked down the aisle. Photo: Instagram carlaesparza1 Carla Esparza, champion of the UFC, got m

UFC champion Carla Esparza as she walked down the aisle. Photo: Instagram carlaesparza1

Carla Esparza, champion of the UFC, got married. The fighter of Ecuadorian roots married dressed in white and at one point in the ceremony she even wore the belt that she won a few days ago.

Esparza was crowned strawweight champion by beating Rose Namajunas at UFC 274, by split decision. ‘Cookie Monster’, as they call her, is an American fighter with an Ecuadorian mother.

This May 17, 2022, the fighter published several photographs of her marriage to Matthew Charles Lomeli. The ceremony was held on May 15.

“#AndNew husband and wife, I still can’t believe I married the man of my dreams,” the athlete wrote on her social media.

“I definitely feel like the luckiest woman in the world to have found you. I feel very grateful every day for having found my perfect partner, my partner in life, “published the fighter.

Esparza is a historic UFC fighter. She is 34 years old and against Namajunas she won the title of champion for the second time. Before her, in 2014, she had already been the first monarch of her category in the UFC. The champion has a professional record of 19 wins and six losses.

Esparza is likely to defend her belt against the winner of the rematch between Joanna Jedrzejczyk and Weili Zhang that will face each other at UFC 275. Although there are also other rivals on the scene.

“With whomever the UFC puts me, I will be there,” said the champion about her next rival.

Esparza dreams of the UFC in Ecuador

After his recent championship victory, Esparza stated that he dreams of a UFC event in Ecuador. “My dream is to see the UFC in Ecuador. I’ll actually be there in August and would love to promote it and see the fans. Ecuador is an incredible country”, said the athlete.

That the UFC make an official billboard in Ecuador is possible. That is based on the good time of the tricolors in mixed martial arts. Esparza is champion; Marlon ‘Chito’ Vera climbed into the top 5 of his category and Michael Morales dazzles more and more inside the octagon. Could it be that these and other fighters will soon appear in the country?

He was celebrating his victory and ended up in the hospital. The unusual injury that was experienced in the #Italy spin » https://t.co/h79JrDb6K3 pic.twitter.com/YVq4Vdai4x

Loading...
Newer Post
When would Manny Pacquiao return from retirement in…
Older Post
NBA: Trophies with the names of Magic and Bird for the MVP of the Conference Finals