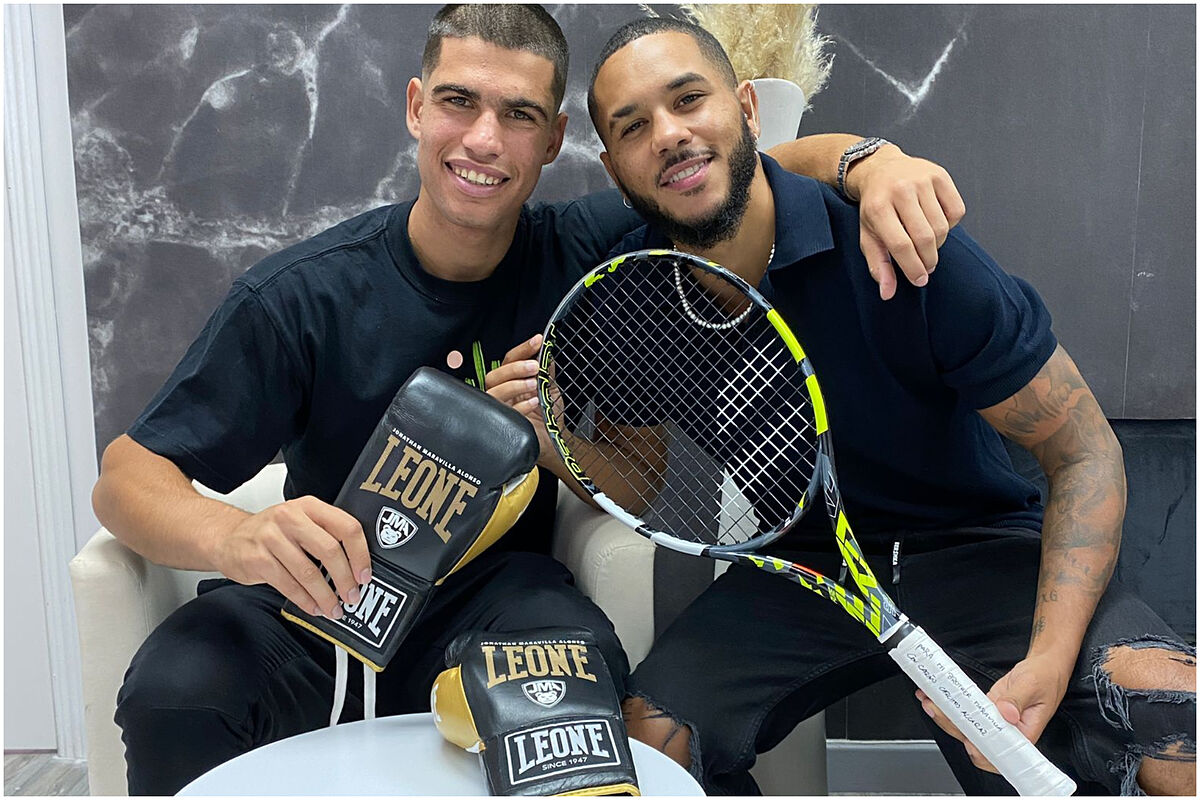 Carlos Alcaraz and Jonahan ‘Maravilla’ Alonso met in person after more than two years of exchanging messages on social media. tennis number 1 took advantage of his presence in Madrid to go to ‘Crush’, a revolutionary aesthetic center in the center of the capital that the boxer opened almost a year ago.

During all this time, Alonso and Alcaraz have been aware of how their careers were evolving. The Murcian tennis player likes boxing. From his visit, he takes the gloves with which Jonathan fought for the World Boxing Association (WBA) Super Lightweight Interim World Championship. For his part, Alcaraz gave him one of the rackets with which he won the US Open. “For my brother Maravilla with love, Carlitos Alcaraz,” reads the dedication.

Before Wimbledon Alcaraz already challenged Ibai Llanos in his networks so that he could count on him for the next edition of the Evening of the Year. “Everything ready to debut tomorrow at Wimbledon, but thinking about the Evening of Year 3, right? Ibai Llanos,” he wrote in his profile.

Furthermore, as I recognized in the anthill, Alcaraz is a declared admirer of the Rocky movies: “They have always motivated me and every time I’ve seen the film my hair stands on end.” “We have agreed that when he goes to Murcia I will give him some boxing classes tennis ylam”, commented Jonathan ‘Maravilla’ Alonso to MARCA.

After 110 fights -98 wins- as an amateur, Jonathan Alonso made the leap to professionalism. In August 2014, he made his debut in Broadway’s BB King before Jos Gmez. He was the first Spaniard to fight at the Barclays Center in Brooklyn (New York). Victory by KO in the third round. Since that day he had accumulated 18 victories in as many fights until the defeat against Puello. In October 2018 he was proclaimed Spanish super lightweight champion. As a professional he has 21 wins, 7 by KO and two losses. Shortly, he will be back in the ring.

Also, for a long time also develops a career in the interpretation. His facet as an actor has allowed him to appear in The King of Havana by August Villaronga. Also in the two seasons of the series Giants (Movistar +), starring José Coronado and directed by Enrique Urbizu. I decided to appear at the casting for welcome to edn, Netflix series. He overcame it, was chosen and embarked on filming alongside Amaia Salamanca, Ana Mena, Lola Rodríguez, Berta Vázquez or the Mexican Belinda Pop. After the success of the first eight episodes, the second season will soon be seen.

Tags: sports Center, Tennis, Carlos Alcaraz
Gustavo Lemos seeks to take a key step at Luna Park against the Welshman Selby to have a World Cup chance
Boxing: Rubn Daz looking to be European champion against Signani in Rome
Boxing: The Mountain from ‘Game of Thrones’ and ‘The Beast’ almost come to blows before their long-awaited match
BOXING 4228

Loading...
Newer Post
How much does it cost and how to buy tickets for the friendly between Peru vs. Mexico in the United States?
Older Post
The Tigers take part in the 2022-23 Children and Youth Golf Tour in Chihuahua