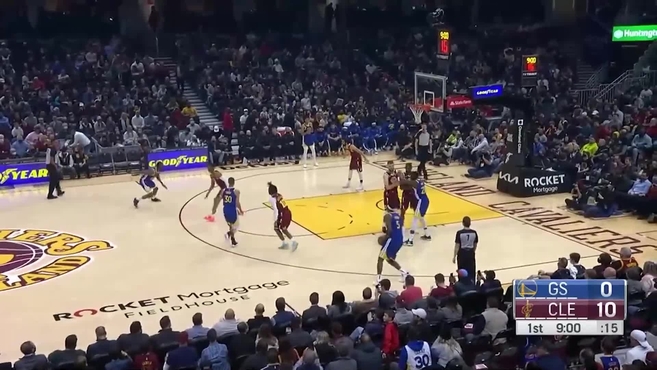 Lhe performance of Stephen Curry in the last quarter of the game that played the Golden State Warriors against the Cavaliers on Thursday night, whe

Lhe performance of Stephen Curry in the last quarter of the game that played the Golden State Warriors against the Cavaliers on Thursday night, when he scored 20 points, ended the hopes of Ricky Rubio’s team and sentenced the final score with an 89- 104 for those from San Francisco.

Curry finished the game as the leading scorer with 40 points, 4 rebounds, 6 assists and 2 steals. His teammate Draymond Green had 14 rebounds, the same as Cleveland&#8217;s leading man Ed Davis.

In the Cavs, guard Darius Garland was the leading scorer with 25 points while the team&#8217;s point guard, Spaniard Ricky Rubio added 10 points, 5 assists and 2 steals.

Before the game started, Rubio received an award from the NBA in &#8220;recognition of his continued efforts to improve the lives of children and families, particularly those impacted by cancer.&#8221; It is the fifth time the NBA has awarded a player for his work from the end of the regular season to the start of the following season.

The NBA thus recognizes the work in Spain and the United States of the Ricky Rubio Foundation to improve the hospital experience of cancer patients and their families. Rubio&#8217;s mother was diagnosed with lung cancer in 2012 and died of the disease in 2016.

Rubio said through a statement that he was honored to receive the award and added that &#8220;there are many NBA players who are working in their communities and I am fortunate to have been chosen.&#8221;

The Warriors had everything going for them. They came to Cleveland as leaders of the Western Conference, with 12 wins and only two losses. Meanwhile, the Cavaliers were sixth in the Eastern Conference with nine wins and seven losses.

The San Francisco team had also won the last eight regular-season games against Cleveland: since December 2016 the Cavs have not beaten the Warriors.

But in addition, the Cavs suffered the loss of six regular players in the lineup, including Collin Sexton, Evan Mobley, Jarrett Allen and Lauri Markkanen.

Despite the casualties, the Cavs posed serious problems for Curry&#8217;s early on. In the first three minutes of the game, the Warriors were unable to score a single point, allowing the hosts to take a 10-0 lead on the scoreboard.

It was Curry who opened the scoring for the Warriors with a triple. The Cavs, with Rubio commanding the game, Darius Garland shooting the baskets and Ed Davis dominating under the hoops, kept up the pressure, increasing the lead to 13 points, 22-9.

But with the rotations, Cleveland lost their concentration and the Warriors did not forgive: they punished the locals with a 2-15 run that tied the game at 24-24 with 1.15 minutes remaining in the first quarter.

A basket by Rubio and an assist from the Spaniard to Kevin Love, who scored a triple, allowed the Cleveland team to finish the first points ahead, 29-27.

In the second quarter, the dynamics were similar, with neither team able to put land through on the scoreboard. The Warriors started the second quarter more toned and managed to accumulate a four-point lead, 31-35.

But the Cavs reacted and took the lead again thanks to the performance of the veteran Davis who rebounded and scored from all positions.

When the break came, the Cavs were three points ahead, 54-51, with Garland as the game&#8217;s top scorer with 18 points while Davis was the top rebounder with 13.

Curry had 15 points of which 12 were the result of four triples of seven attempts while his teammate Nemanja Bjelica had 14 points. For his part, Rubio had five points and 3 assists.

Coming from halftime, the Cavs hit the gas with a toned Love and a better scoring hit from Rubio. Love made two of three 3-pointers in the third quarter and totaled 11 points. For his part, Rubio made five points, with a triple and a shot of two.

The Cleveland team scored a total of 27 points in the third quarter, 10 points more than the Warriors, where Curry could only score 5 points and Andrew Wiggins 6.

With an 81-68 on the scoreboard for the Cavs, the fourth quarter started. But the 13-point lead of the locals quickly dissipated.

In less than four minutes, three consecutive 3-pointers by Curry and two baskets by Damion Lee placed a tie, 81-81, on the scoreboard. The defensive pressure of the Warriors, one of the best in the NBA, emptied the Cavs who could only score their first two points of the fourth quarter with 6.30 minutes left in the game.

By then it was too late. Curry, who had &#8220;only&#8221; scored 20 points in the first three quarters, frowned and killed all the Cavs&#8217; hopes. The Warriors point guard scored another 20 points in the fourth quarter.

Meanwhile, the Cleveland team sank: the Ohio team only made eight points in the last 12 minutes of the game, which sentenced the final score to 89-104.

Loading...
Newer Post
“When you have an open file, certain tweets do not help you”
Older Post
Who is Erik Roqueta, piece that Bayer Leverkusen will steal from Chivas