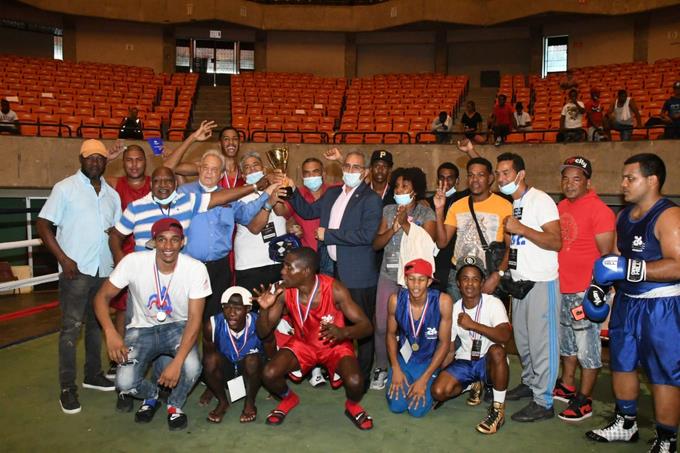 The five gold medalists from the PSD region were won by Waner Lara (54 Kg) who won 4-1 over Luis Manuel Asencio (DN); Jean Carlos Pérez in the 57 kg who defeated Víctor Peguero (East) 5-0, Elizer Rodríguez to Kervin Guerrero (East) in the 60 kg division, Noel Pacheco to Brian Ortiz (North) 5-0 in the 71 kg and Willy Noel Hernández who won 4-1 over Félix Junior Pérez (South) in more than 92 kg. The defeated were left with silver medals.

Euri Cedeno, in the 75 kg, defeated Miguel Angel Arias by RSC to give the East its second of four gold medals won by that region. They also conquered gold medals for that demarcation, Nathanael Jiménez in the 51 kg who passed 4-1 over Enmanuel Javier (South), Critian Pinales won by the PSC route over Esterlin Guzmán (PSD) in the 86 kg and Daniel Guzmán in the 92 kg on Yonatan Pimentel (PSD) for 41.

The South obtained its gold medal in the 80 kg division with its fighter Luis Tejada who defeated Yeremis Puello (East) 4-1, and the National District also added a gold with Jhonny Fernández who defeated by

Kevin Jiménez in the 67 kg division.

Rubén García, president of Fedoboxa, highlighted the great technical and organizational level of the fair, which was made possible by the support offered by the Ministry of Sports on the staff of its owner, engineer Francisco Camacho.