Date 21 of the National Tournament had its first two winners. Colo Colo and Ñublense defeated Deportes Antofagasta and Coquimbo Unido, respectively, and thus cut the streak of five draws that the day had.

So it was on Sunday in the National Tournament

The last game on Sunday was the one that Ñublense ended up winning 2-1 against Coquimbo. Rafael Caroca and Alexander Aravena scored for the locals, while Ignacio Jeraldino had tied temporarily.

Before, Colo Colo defeated Antofagasta by the minimum account, with a great goal from Juan Martín Lucero. In this way, the ‘Cacique’ retains the six points of advantage it has over Ñublense. He takes nine from Curicó.

At La Cisterna, by far, the best game of the weekend was played. Palestino and Audax drew 3-3. A brace from Bruno Barticciotto plus a goal from José Bizama had put the Arabs in the lead, but Fabián Torres, Germán Estigarribia and Jorge Henríquez prevented the loss.

At the end of Saturday, Everton and Universidad Católica finished in a 1-1 draw at the Sausalito stadium. Matías Campos López and Gary Kagelmacher were the scorers.

O’Higgins and Curicó Unido met in El Teniente de Rancagua and tied 0-0. The great impact of that game was the expulsion of Matías Donoso.

And the other engagement on Saturday was staged by Cobresal and Deportes La Serena. The teams played at El Cobre and shared points after a 1-1 draw. Gastón Lezcano scored for the miners and Leonardo Valencia decreed the final parity.

Which party closes the date?

This is the table of the First Division of Chile 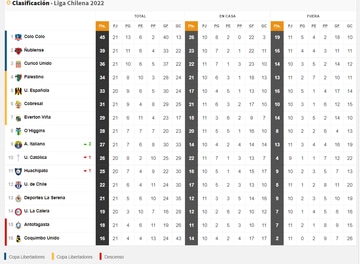