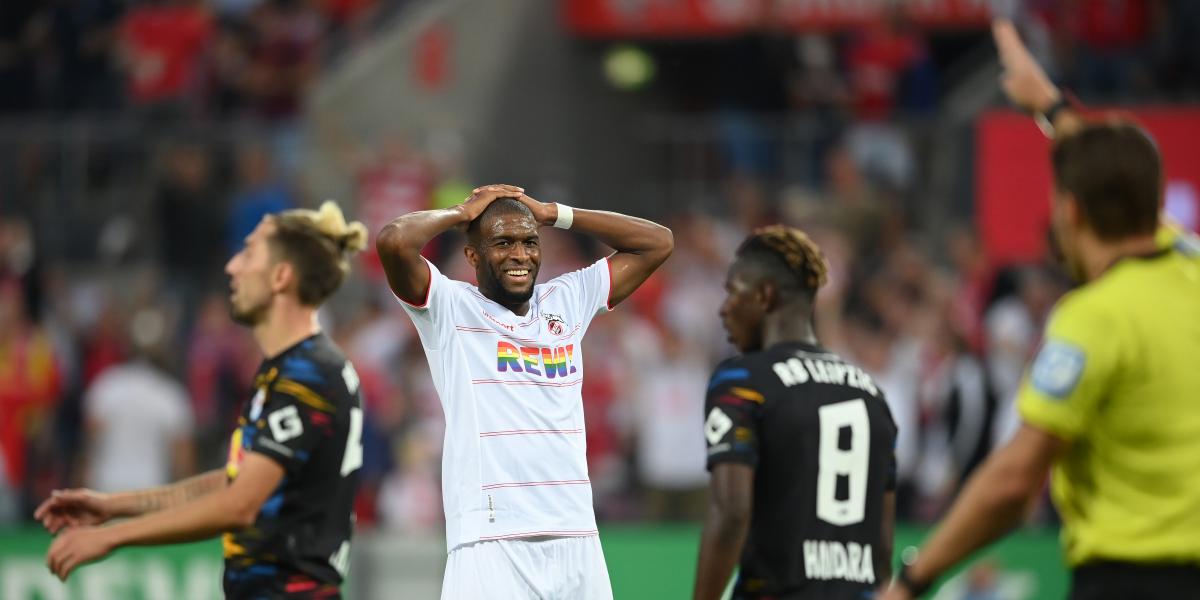 Distribution of points (1-1) in the RheinEnergieStadion in a game without truce, with countless occasions for both sides and with the goalkeeper Timo Horn from Salvador del Cologne. First scored Anthony Modeste in the early second half for those of Steffen baumgart after a goal from VAR and tied headlong Amadou Haidara in the final stretch to avoid the defeat of the Leipzig, 13th and that continues with taking the pulse of this Bundesliga. The locals, despite the tie, get into European positions (6th).

The Leipzig began the game looking decisively for the rival goal. In minute 3, Dani Olmo he opened hostilities with a failed shot and on 7 ‘, Nkunku was able to score the 0-1 with a shot from outside the area that crashed into the post. In the middle of the exchange of blows, the Cologne he also had his chance at 11 ‘with a great shot from Ondrej Duda.

In a vibrant and contested first half with an infernal rhythm, the visiting team continued to encircle Timo Horn’s goal. At minutes 17 and 25, Dominik Szoboszlai he had the goal in his boots. First with a direct free to the edge of the front that miraculously saved the goal of the Cologne and with a shot that touched on Czichos and that he was about to enter the local goal.

They forgive the expulsion to the central Czichos

Shortly after, the central Czichos made a reckless entry about André Silva, which he kicked in the face to leave him momentarily injured. The collegiate Felix brych he forgave him the second yellow and the consequent expulsion, although his coach, Steffen baumgart, did not take long to replace (31 ‘) his revolutionized defender with the Asturian Jorge Meré, which notably improved the level of the rear of the Cologne.

The Leipzig of the North American Jesse marsch the piston lowered a bit, which Cologne took advantage of to score in the 37th minute, but the goal was annulled for offside by the forward Mark Uth. The fast-paced and fun first half ended without moving the scoreboard, despite the fact that both teams insistently searched for the goal.

As soon as the meeting resumed, the fighter and increasingly daring Cologne went out for all. A whiplash of Uth was repelled by a sensational Gulacsi and a head of Modeste did not enter by very little. The local team was invalidated in 50 ‘a new goal for offside by Modeste himself.

But the third time was the charm. The French striker shot Gulacsi, but the target was annulled by the referee in the first instance due to an alleged previous foul by Uth on Simakan. Nevertheless, Felix brych, after being warned by the VAR and review the action on the field monitor, rectified and the 1-0 of Modeste ended up rising to the scoreboard.

Dani Olmo, from more to less and replaced

The Leipzig tried to react with two good chances from Orban, who ran into a good intervention from Horn, and of the newcomer Poulsen, who failed with everything in his favor to tie. In 66 ‘, Forsberg, another man refreshing the visitors after replacing a Dani Olmo that went from more to less, he saw how the referee, after consulting with the VAR, did not give him a goal for being offside.

Seconds later Nkunku touched the equalizer, which was a prelude to 1-1. The Malian Amadou Haidara put the tables (71 ‘) when he finished off a corner kick thrown by an excellent Szoboszlai.

The Leipzig, with total harassment in the final minutes, had opportunities to get ahead in the RheinEnergieStadion light, but the shot from Nkunku was diverted to a corner by Meré. He also had his Poulsen with a very hard shot to which Horn responded phenomenally.

The goalkeeper of the Cologne He showed off again in the 90th minute by disrupting a shot from Szoboszlai. Horn He ended up saving the furniture of the home team and his visiting colleague, Gulacsi, did the same in the discount by aborting two consecutive occasions of Doubt and Andersson.

Spectators: About 25,000 at the RheinEnergieStadion

Loading...
Newer Post
“On the 24th they will enter from all sides”
Older Post
When and who does he fight? UFC confirmed another battle for Argentine Marcelo Rojo