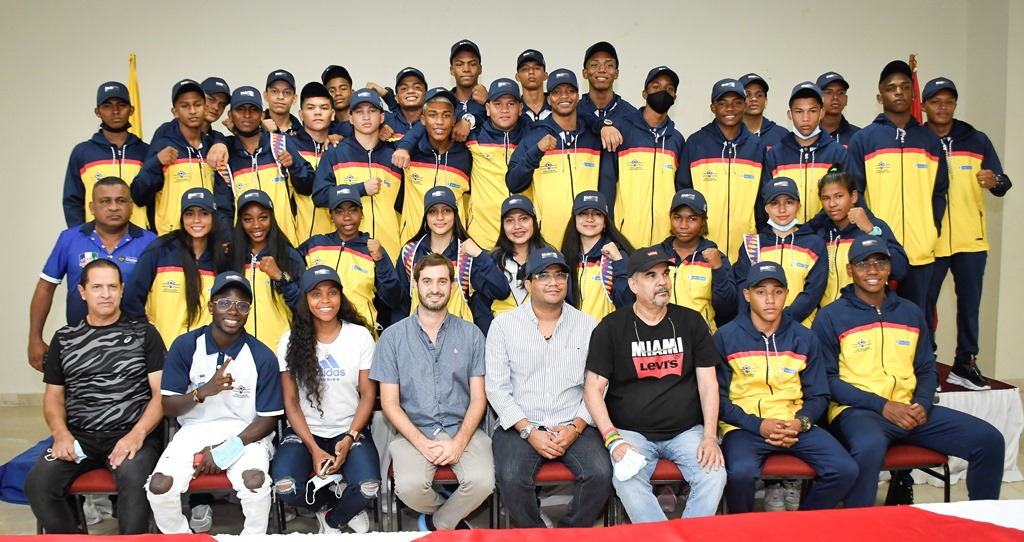 With the presence of the Olympic medalists Yuberjen Martínez and Ingrit Valencia and the boxers who have just bathed in gold at the Junior Pan American Games, in Cali, Marlon Hurtado and Carlos Utria, the Colombia PAD Team (Advanced Plan of Development) boxing.

This team will be made up of 31 athletes, who managed to be in the seats of honor in the youth boxing championship that was held in ‘La Arenosa’, last October, and who were automatically linked to this program of the Ministry of Sports and the Fecolbox.

The event, which took place at the Hotel Suite Continental, was led by Alberto Torres, president of the Colombian Boxing Federation (Fecolbox); Julio Torres, manager of Fecolbox; Alfredo Carbonell, manager of social development of the Mayor’s Office, and Rafael Iznaga, technician of this Colombia Selection.

“These guys are the future of Colombian boxing, they are called to be the Ingrit Valencia and Yuberjen Martínez of the future, and they are going to write their own history. To thank the support and backing of the Ministry of Sports for making this project a reality and to the mayor of Barranquilla, which has turned the city into the epicenter of boxing in our country, ”said Alberto Torres, president of Fecolbox.

Ingrit Valencia and Yuberjen Martínez play an important role in this Selection, because they are the mirror in which they want to see these 31 athletes from all regions of the country, who dream of appearing in the international competitions that are to be seen from 2022.

“I am proud of you, because the mere fact of belonging to this National Team speaks very well of the talent you have. Of course, getting there is not the difficult thing, the complicated thing is staying. The doors are open and you decide if you keep them that way, wide open ”, said Yuberjen.

“I feel calm and very well represented by all of you, by those who have just bathed in gold in the Junior Pan American Games in Cali and by those who are just beginning their preparation and are already standing out in the different national tournaments. This new generation of boxers is destined to succeed. I hope they continue to represent the country very well in upcoming tournaments ”, added Ingrit.

Rafael Iznaga, coach of the Colombia PAD National Team highlighted the growth and respect that Colombian boxing has earned in the world in recent years.

“A few years ago we were going to the competitions to fulfill and today we have achieved that Colombian boxing is respected worldwide. In all the Games of the Olympic cycle we have done very well. The mentality that must be impregnated in these boys, who are the future of this sport, is that Colombian boxing must be the best in the continent and one of the best in the world. There is talent and a lot of desire ”, concluded the coach.