Colombian players with the best valuation for international football 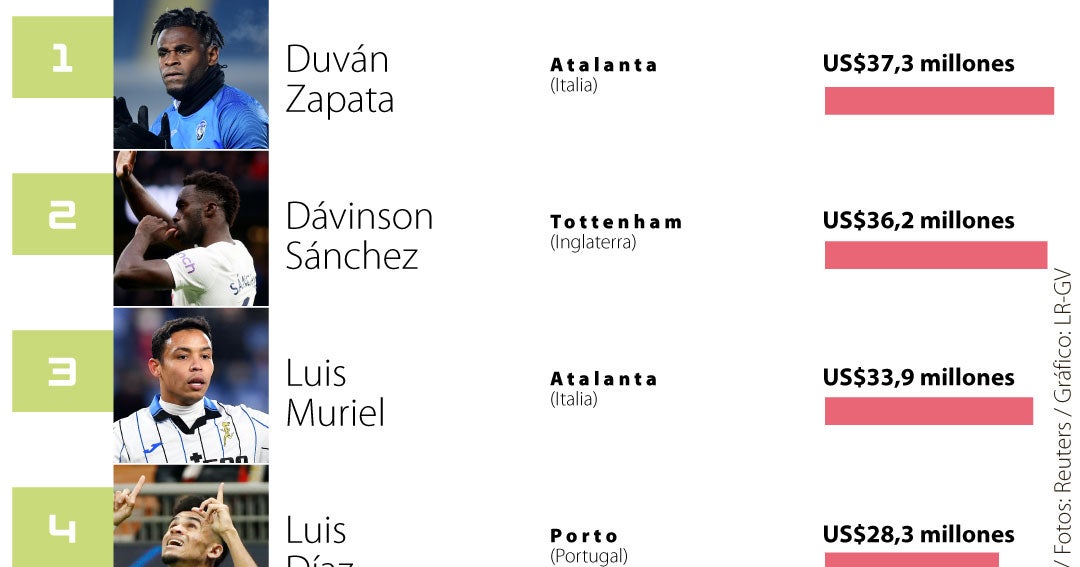 The striker of the Colombian National Team, Duván Zapata, heads the list of the 15 most valuable soccer players today, according to Transferma

The striker of the Colombian National Team, Duván Zapata, heads the list of the 15 most valuable soccer players today, according to Transfermarkt.

The player, who also plays for Atalanta de Bergamo in Italy, is valued at 33 million euros (US $ 37.3 million). Zapata is the fifth top scorer in Serie A and recently broke the 100-goal mark in Italy.

Zapata is followed on the list by England’s Tottenham Hotspur defender Dávinson Sánchez, with a market value of 32 million euros (US $ 36.2 million). He is a starter in Antonio Conte’s team, which is currently fifth in the Premier League, six points behind Arsenal.

In third place on the list is Zapata’s teammate and Atalanta’s forward, Luis Muriel. The one born in Santo Tomás, Atlántico, is valued at 30 million euros (US $ 33.9 million), despite being a substitute on his team. He has only started in five of 12 games played.

Luis Díaz of Porto de Portugal is in the fourth place of the most valuable Colombian players, with a value of 25 million euros (US $ 28.3 million), although the winger of the Colombian National Team is one of the most sought-after footballers in Europe , so his team would ask for up to $ 90 million.

Liverpool, Manchester United and Bayern Munich are some of the clubs that would be interested in the Colombian player.

The top 5 is completed by James Rodríguez, which is valued at 20 million euros (US $ 22.6 million), although it had a market price of US $ 90.5 million on Transfermarkt.

James was in 2015 one of the most expensive players in the world, surpassed only by Cristiano Ronaldo, Lionel Messi, Neymar and Luis Suárez and had a stint at Porto, Real Madrid, Bayern Munich and Everton.

He now plays in the Qatar league after being traded to Al-Rayyan for $ 9 million, Transfermarkt revealed, although Everton had signed James at zero cost from Real Madrid.

Other names also stand out on the list, such as the most expensive Colombians on the market, such as Juan Guillermo Cuadrado, Yerry Mina, Wilmar Barrios, Rafael Santos Borré, among others.

Tags: Agro, Automotive, culture
Rappi signs alliance with McLaren Racing and sponsors a Formula 1 team
The main recommendations for those who want to play golf for the first time
Whiskey, golf and fashion of the 20s, this is the bet of G Lounge during October
FOOTBALL 1120