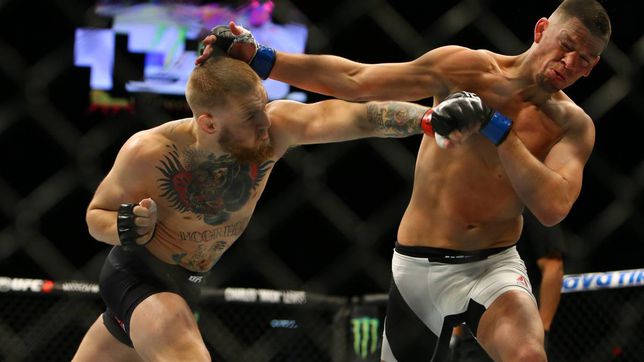 Nate Diaz will fight for the last time in the UFC, in the company's 279th edition, against Tony Ferguson after Khamzat Chimaev, the rival with whom

Nate Diaz will fight for the last time in the UFC, in the company’s 279th edition, against Tony Ferguson after Khamzat Chimaev, the rival with whom he was originally scheduled for his fight, did not give the necessary weight for the fight.

According to multiple reports, Dana White, president of the UFC, tried to rehire Díaz, but the martial artist preferred not to continue with the employment relationship. Due to this, Conor McGregor congratulated Diaz, through his Twitter account for ending his contract with the UFC and assured that the trilogy between them will happen.

“Congratulations to Nate Diaz on reaching the end of his contractual obligations to the UFC as a genuine superstar. An incredible achievement. Well played. Our trilogy will happen,” the Irishman tweeted.

Congrats Nate Diaz on making it to the end of his contractual obligations with the UFC, and as a bonafide superstar goer. An Incredible Feat. Fair play.
Our trilogy will happen.

In a subsequent tweet, McGregor added that Chimaev should have been written off the card of the next UFC event because it will set an inappropriate precedent for the fights to come.

YOU MAY BE INTERESTED: Boxing also stops after the death of Queen Elizabeth

Diaz and McGregor met twice in 2016 and the balance was one victory for each martial artist. In the first edition, held on March 5 at UFC 196, victory went to the American thanks to a submission in the second round. The second, held on August 20 at UFC 202, was a victory for the Irishman after the judges overwhelmingly favored him after the five mandatory rounds.

Emiliano Linares signed a contract with Alex Davis, one of the main promoters of the UFC | Other Sports | sports
UFC: Controversy in the UFC: Reyes does not want to fight with Jon Jones after his arrest
UFC 279: Chimaev vs Diaz: when is the fight, schedule and where to watch live on TV and online
UFC/MMA 1198

Loading...
Newer Post
They claim ‘Canelo’ for not facing other Mexican boxers
Older Post
Aspadisi will raise funds with the sale of tickets for the Octopus venue