Countdown to the illustrious Solheim Cup, the best women’s golf 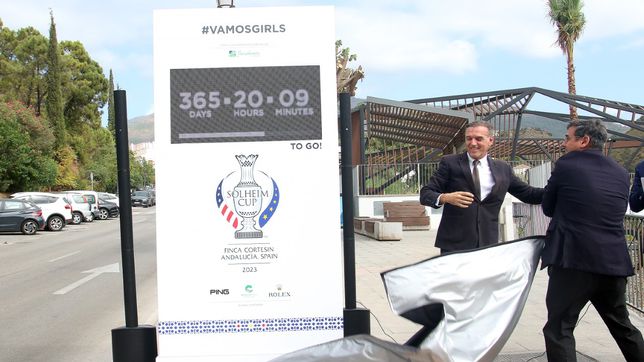 The Solheim Cup, the spectacular women's golf duel between Europe and the United States, which will be played in Spain for the first time between S

Countdown to the illustrious Solheim Cup, the best women’s golf

The Solheim Cup, the spectacular women’s golf duel between Europe and the United States, which will be played in Spain for the first time between September 22 and 24, 2023 at the glamorous Finca Cortesín de Casares, begins its countdown with the celebration events of the One Year To Go. It means that there are only 365 days left for this great event to start at the emblematic Finca Cortesín in Casares. It can be said that this Soldheim Cup joins the list of great events organized by Spain: the soccer and basketball World Cups, the 1997 Ryder Cup, the America’s Sailing Cup…

This is three countdowns. The first is in Benahavis, the second in Casares and the third in Puerto Banús, places that will have a special role in this great tournament. A clock is discovered that will count down the days, hours, minutes and seconds remaining before this great duel between Europe and the United States begins. 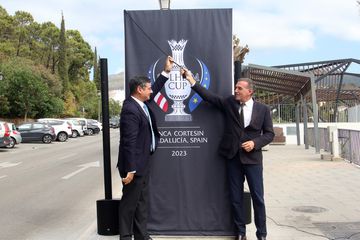 Mena and Mansilla before discovering the emblematic watch.Paco Rodriguez

Those in charge of inaugurating the Benahavís clock were its mayor, José Antonio Mena, and the president of the Spanish Golf Federation, Pablo Mansilla. Both stressed the importance of a world-class event “where the presence of many fans is expected” they highlighted. “We had been fighting since 1016 to get this Solheim Cup to come to Andalusia” highlighted Mansilla. Mena for his part stressed that this event “will be beneficial for the Costa del Sol, Andalusia and Spain”.

In addition to the aforementioned authorities, the Casares and Puerto Banús countdowns hope to have Arturo Bernal Bergua, Minister of Tourism, Culture and Sports of the Junta de Andalucía; Francisco Salado Escaño, president of the Diputación de Málaga; María Ángeles Muñoz, mayor of Marbella; José Antonio Mena, Mayor of Benahavís; José Carrasco, Mayor of Casares; and authorities from the LET, the Royal Spanish Golf Federation, the Solheim family, and the captain of the European team, Suzann Pettersen, among other personalities.

And the agenda for this Wednesday is tight. After this act we will have at 3:30 p.m. (Casares): Countdown in the driving range of Finca Cortesín.

6:30 p.m. (Marbella): The “Longest Swing” at the Puerto Banús dam, where 365 children will make a wave-shaped approach with biodegradable balls to the sea.

7:30 p.m.: Cocktail and countdown lighting at the Dock of Honor in Puerto Banús

The Solheim Cup was first played in Florida in 1990 and is named after Karsten Solheim, the businessman and golf club designer who was behind its creation. In the Solheim Cup two teams of 12 players compete over three days with the same format as the Ryder Cup and 28 games in total (eight foursomes and eight fourballs the first two days and 12 singles on the final day) . Since it started in 1990, the United States has won ten times to Europe’s seven.

Woodard: When the bright future of golf was highlighted in the lopsided US Junior Women’s Final.
Stage 10 of the 2021-22 season of the Professional Golf Tour is ready
Rahm: “It would be an honor to play a golf tournament with Rafa Nadal”
GOLF 1532