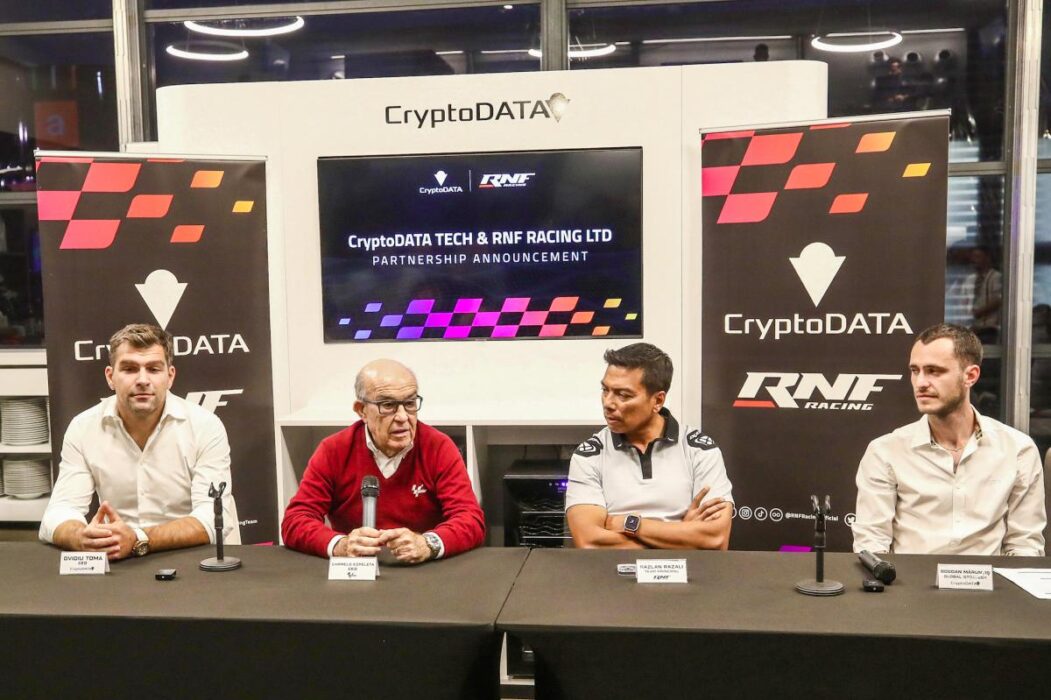 CryptoDATA Tech, a pioneer in blockchain-based technology and developer of cybersecurity hardware and software solutions, is pleased to announce

CryptoDATA Tech, a pioneer in blockchain-based technology and developer of cybersecurity hardware and software solutions, is pleased to announce its acquisition of a majority stake in RNF Racing Ltd. This strategic investment marks a significant milestone and the start of a new It was for the Romanian holding company and for the RNF MotoGP Team, which has been active for fifteen months.

After being announced as the main official sponsor of the last three races of the season, the cybersecurity company CryptoDATA has become a partner that shares the same values ​​and passion, and that recognizes the potential value of a MotoGP team in the long term. .

With CryptoDATA as the majority shareholder, the vision and strategy is to go beyond racing, expand the business and services to motorsports, mainly MotoGP, and take on the role of managing the business and brand aspects of the team. . The RNF MotoGP Team will continue to participate as an independent team in MotoGP, the top class of the FIM World Championship, under the command of team principal Razlan Razali, who will focus on the sporting and technical aspects of the team.

On the occasion of the last race of the season and to highlight this historic milestone, the RNF MotoGP Team and CryptoDATA will present a special design of the bikes on race day at the Valencia Grand Prix.

Razlan Razali, Founder and Team Principal of RNF Racing Ltd:
“Today marked a historic milestone for the team. I want to thank CryptoDATA for placing their trust in the team and in me for the future.”

“In a short time, the talks have led to a long-term commitment. We’ve expanded our partnership and as I said, it’s a fantastic collaboration. The union of the two companies will help the team not only to improve its racing performance, but also to boost the growth of the business aspects, and this is where both parties join forces to share their experience and knowledge. My main objective is to ensure that the team strives to win the championship while the CryptoDATA team, made up of young, smart, innovative and ambitious people, develops strategies to strengthen our position outside the circuits.”

See more: With this new alliance, Yuno integrates the payment option with bitcoin

“With our track record of success, the same strong and passionate team as our MotoGP team and our strong rider line-up, we are set to return to racing in top form with CryptoDATA next season.”

Ovidiu Toma, CEO and Founder of CryptoDATA Tech:
“We are delighted to have expanded our partnership and become the majority shareholder of the RNF MotoGP Team. The MotoGP World Championship is an exclusive and international showcase, a special universe where the starting grid is like a stage for heroes, in which CryptoDATA has found its place by sharing its values ​​and objectives. We have become the first Romanian company to sponsor a Motorcycle World Championship, which is being held at the Red Bull circuit this year, and we are more excited and motivated than ever to become the majority shareholder of the RNF Team. This represents not only a historic milestone for CryptoDATA, but also a fresh start and a significant incentive.”

“We face 2023 with optimism and confidence, as our team is led by qualified, serious and highly experienced leaders. We will do everything possible to help the team achieve its goals and reach its full potential in MotoGP.”

Bogdan Mărunţiş, Head of Global Strategy and Founder of CryptoDATA Tech:
“We are pleased to announce our partnership with the RNF team and we are confident that we will be able to help you set strategic goals for the upcoming season and long-term performance goals, both on and off the track. We want to start transforming the team into a successful company that offers unique experiences to our fans and partners, while promoting our brand values ​​in the best international races.”

“As representatives of CryptoDATA, we will be in charge of the strategic management of the company and will work to provide stability and further strengthen the position of the team in the world of MotoGP and in the business arena.”

Carmelo Ezpeleta, CEO of Dorna Sports SL:
“The agreement that Razlan Razali has signed with CryptoDATA allows him to maintain the viability and presence of his project in the world of MotoGP. We are delighted to see a new sponsor supporting a team, especially one that Dorna brought to the championship. We are satisfied with the relationship with CryptoDATA at the Austrian Grand Prix. They have the idea of ​​developing and putting things in common with Aprilia next year, which gives MotoGP the stability it needs. It is an excellent welcome for CryptoDATA to the MotoGP. The fact that he is not limiting his involvement to sponsorship, but to a whole team, shows the importance of motorsports and MotoGP in particular. We know that Razlan received many offers and we believe that he has chosen the best option to consolidate his structure for the future ».

MotoGP 2021: Quartararo plays with Messi and has a great detail with Sergio Ramos
Ducati has “much more advantage”
MotoGP: Summary of the 2022 world championship
MOTOGP 1014