Cuba debuts with victory in World Boxing in Serbia – Escambray 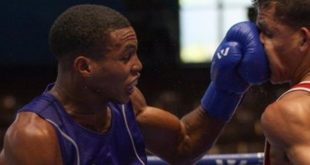 The triumphs came first by Osvel Caballero, in the 57 kilograms and by the middleweight Kevin Brown Brown achieved victory in his 67-kilogram divi

The triumphs came first by Osvel Caballero, in the 57 kilograms and by the middleweight Kevin Brown

Brown achieved victory in his 67-kilogram division after his rival on duty did not show up (Photo: PL)

The middleweight Kevin Brown assured this October 25 without throwing a single blow the second success of Cuba in the XXI World Championship of the International Boxing Association (AIBA), with action in Belgrade until November 6.

Brown achieved victory in his 67 kilogram division after his rival on duty, the Jamaican Joshua Frazer, did not appear on the tarmac of the Stark Arena in this capital.

His next fight will be on October 28 against Shain Barnsley Boniface, from Seychelles, seeded directly in the second round.

The Cuban representative of the 57 kilograms will be measured in his next fight against the Indian Sajjad Mohammadpour, another who will have his first appearance in the second phase of the fight whose preliminary fights will last until November 2.

The Navy of the Greater Antilles will try to improve the harvest of three golden awards from the Yekaterinburg joust in 2019, on the way to expanding the historical total of 77 gold, 35 silver and 26 bronze medals.

Loading...
Newer Post
The tough cross between Facundo Campazzo and Ricky Rubio in the NBA | The point guards fought in Cleveland’s victory over Denver
Older Post
Spanish football, without positives in 40 days