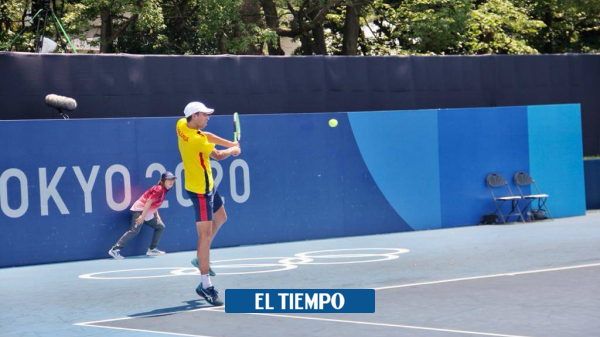 The Colombian card in the individual tennis of the Tokyo Olympic Games, Daniel Galán, overcame the first obstacle in the initial phase, after defeat

The Colombian card in the individual tennis of the Tokyo Olympic Games, Daniel Galán, overcame the first obstacle in the initial phase, after defeating the Egyptian Mohamed Safwat, with partial 7-5 and 6-1.

Galán, under a suffocating heat, managed to advance to the round, because his opponent was strong and complicated it in a very even match.

It may interest you: (Sara Sorribes eliminates Ashleigh Barty from the Olympic Games)

In the first &#8216;set&#8217; the latter was reflected, so much so that he finished 7-5, a triumph that gave the Colombian racket a break to face the second with greater confidence.

And it was there that the Egyptian collapsed, could not bear the loss of the first set and succumbed to the good tennis of Galán.

Galán arrived at the Tokyo Games, after the reassignment of places, awarding the 112th position of the ATP ranking of Galán, the number one male racket in the country at 25 years of age.

The national racket comes from reaching the second round at the Wimbledon tournament.

Galán is the second national tennis player to access the second round in the individual tournament, after what Santiago Giraldo did in London 2012.

&#8220;The beginning was doubtful. I waited to see what game we would do and then I got stronger in the game for the win,&#8221; Galán said.

The Colombian tennis player will face Alexander Zverev in the next round.

Tags: round, daniel, games
Irish boxer out of competition after injuring himself while celebrating
I’m already fighting to be in Paris 2024
Australian boxer paints his nails to break stereotypes
TENNIS 23