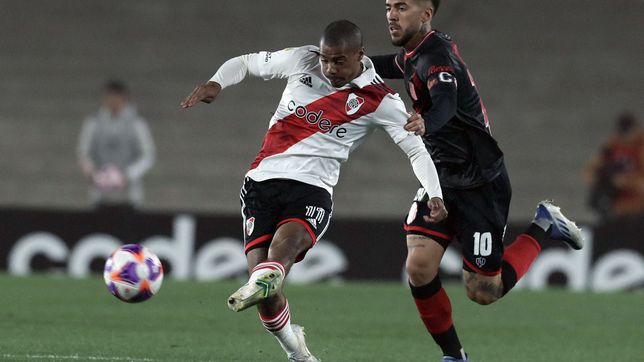 "When De La Cruz is well at all levels, it makes a lot of difference, he is one of the most complete midfielders in Argentine soccer." The phrase

“When De La Cruz is well at all levels, it makes a lot of difference, he is one of the most complete midfielders in Argentine soccer.” The phrase could correspond to any analyst with common sense who has followed the trajectory of the Uruguayan since his arrival in Núñez back in 2017, but it takes on greater value as it was pronounced by Marcelo Gallardo.

The coach, who at some point this season decided to put the number 11 on the substitute bench and who seemed somewhat annoyed with the decline in his performance, gave him back the place of privilege that the player also earned from a notorious lift .

In the midst of the push and pull due to the renewal of his contract, the promise not yet finalized of a sale to Europe in the event that an offer arrives that closes all parties and natural wear and tear after five years with the Red Band, Nico seems to have reinvented himself to give this River the rebellion that he lacked for much of 2022.

Gone are some injuries, difficulties in adapting to changes in position and annoyances in the framework of a collective functioning that did not appear. At a certain moment, the Doll understood that to recover one of his figures, the solution was to restore continuity and confidence. And he was not wrong.

At times as the first pass at the start, at times as double five in the recovery, but also breaking lines at speed, filtering passes and reaching the defining position, De La Cruz became an all-terrain vehicle that gives the Millionaire something that no other another footballer on the squad has.

To his always unbalanced ability and change of pace, he added more sacrifice, more vision and better decisions, which earned him the praise of his coach and also a new ovation from the stadium in the victory over Barracas Central.

“From here I am never going to leave free, I have great admiration for River”, confirmed the Uruguayan whose pass belongs 70 percent to Liverpool and who knows that at the end of the year he could leave, but not before renewing his bond to leave money to the institution that allowed him to make the leap to the elite of South American football.

“Details are being finalized and in the coming weeks the renovation will surely be taking place,” he confirmed on the field of play while the public broke their hands to applaud another outstanding performance by one of the fans’ favorites.

Gallardo has not yet defined what formation he will use in the Superclásico at La Bombonera and several of his men arrive in doubt for physical or tactical reasons. But if there is one certainty, it is that De La Cruz will be there from the start and, as has been happening, football.

Loading...
Newer Post
Andy Ruiz tells how they pointed him out for his physique…
Older Post
Boxing: Tyson Fury challenges Anthony Joshua: “Let me know if you want to fight me this year”