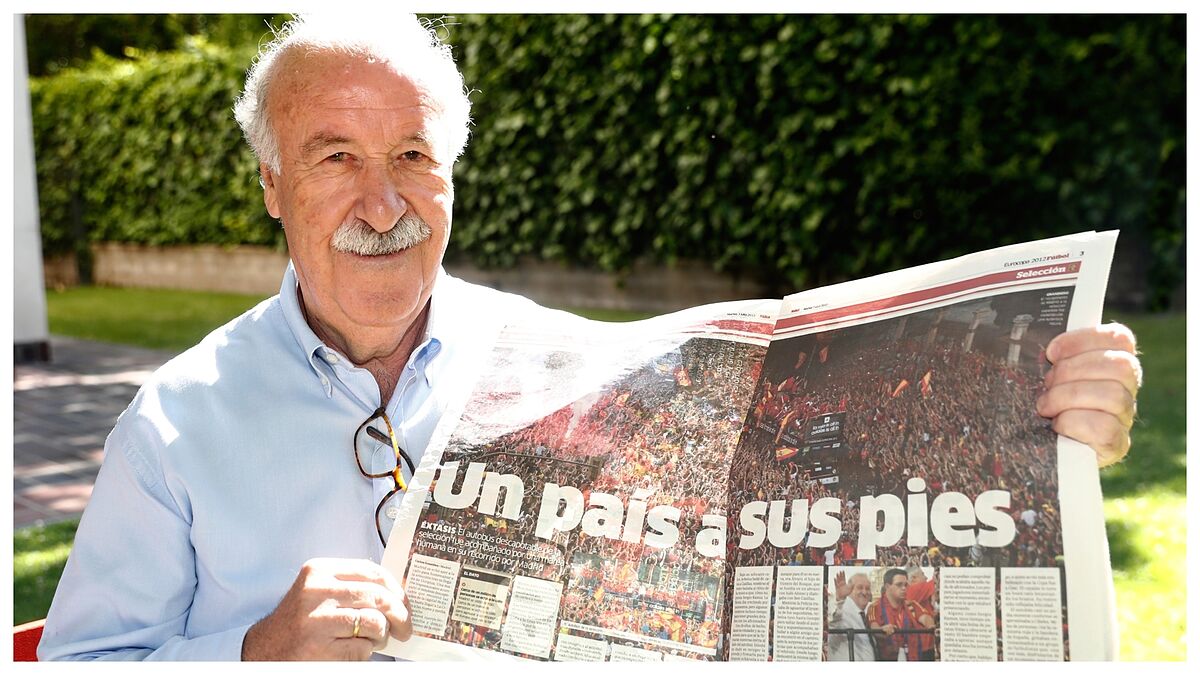 Vicente del Bosque (Salamanca, 1950) continues in his thing, which is football. The morning will be spent watching a youth tournament in Mayor of

Vicente del Bosque (Salamanca, 1950) continues in his thing, which is football. The morning will be spent watching a youth tournament in Mayor of Henares. His calendar is always full of events. Some of its own, like the campuses of its foundation that are launched in various parts of the Spanish geography with the arrival of summer. Others linked to his enormous legacy as a footballer and coach of the spanish team. Amongst this precious heritage today comes the memory of the 2012 European Championship, the day that Spanish football reached the highest point in its history. July 1 is another marked day in the saints of La Roja, perhaps the least celebrated but on which everything converges.

QUESTION. Friday, July 1 marks the tenth anniversary of something that was like touching the sky.

RESPONSE. Well yes. It was something like closing the circle, of something magnificent that got the selection. and she was made of the best possible way.

Q. Don’t you have the feeling that the one in kyiv is the least remembered and valued?

R. We already know that before the big championships that excess of optimism arises, of euphoria, especially when we come from being champions of Europe and the world. But later you realize how difficult it is to achieve goals. I don’t like that of saying “we’re going to win, we’re going to win”. Because it is not. And then it is reversed when they are badly given, as happened to us when we fell in Brazil when we returned to Madrid. What if ridiculous, disasters, unbreathable weather… But I think that kyiv was considered the closing of a great stage.

Q. The road was not easy. Hierro left, Puyol and Villa were injured, the war between Madrid and Barcelona…

A. It is true. We were putting all that in the place it should, naturally. The players realized that this was not the Spanish team, that we cannot be locked in an insane rivalry. It must exist, but healthy. We all branch of the same team. We correct it.

Q. When did you feel that wound healed?

A. In the friendly with Chile in September 2011. In the end, Iniesta clashed with a rival. Arbeloa appeared to defend Andrs, he made a mess and Busquets came from midfield to go for the one who had let go of Álvaro’s hand. I remember that I said on the bench that this was solved, that if Arbeloba and Busquets were fighting together the symptom was that things were going well.

P. Villa’s loss led him to play with Cesc as a striker, which he already did in Madrid with Guti.

R. Surely it was a mana, that we coaches have many. I believe a lot in that midfield players with a lot of mobility, arrival and goal. It also led us to that how Italy started the game with Pirlo. With Xavi and Cesc we wanted him not to be comfortable. It went well, but I don’t think it was because of the coach’s decision.

R. Well, because we had a very good team, great players. And that bit of luck that you have to have.

P. The conclusion of the UEFA experts was that Spain won unnaturally, against what the rest of the teams did.

A. It can be. We have our own style led by a group of midfielders who were leading with that, they were very comfortable. The best thing for a coach is that the players believe him. And they believed in that more than the coach himself, so great. But one thing, surely if we hadn’t won it would be said why don’t we play with a pure striker. It seems that playing without 9 is going against football, but there is Benzema who is a center forward who makes football from midfield.

P. Actually there were three games with 9 and three with false 9.

R. That’s why he said about Pirlo’s singularity. and that’s why we repeated in the final with the same.

Q. It wasn’t the South African thing, but there were also criticisms: Arbeloa, too much playing…

R. In football everything is debatable and everyone has their part of reason. That if the two midfielders, depending on whether you were born in Madrid or Barcelona, ​​the natural evolution of Ramos from lateral to central, which seemed like a fix but was reality…

Q. If Puyol hadn’t been injured, would Sergio have played central?

A. Well, I don’t know. We would have faced it and shaped it,

R. The first day in Gniewino I ended up with both. Half jokingly I told them that if two great guys like them, majestic and good players, were fine and the personal relationships between them were good, that would be transferred to the whole team. And so it was.

A. It can be. But it scares me to say that, because someone may wonder why they went to Brazil or to the Euro 2016. Well, because they all continued to play at the highest level in their clubs. Who was I to say that they were no longer to go to the selection? How difficult it is to establish that border up to here with those types of players! Now there is a natural, logical evolution. And in fact Jordi Alba or Busquets are still there, it was Albiol recently…

P. Where do you place that point of luck that you always refer to in the 2012 Euro?

R. It may have been that we reached the final with one more day of rest, in the goal so fast to tie the first day… These are details.

P. And Croatia was the most difficult?

R. Yes sir. We beat a team that were already very good in the end. Casillas made a save to a header from Rakitic.

Q. And about the biscuitthe arrangement that Italy theme?

R. In sport you have to be as clean as possible. The only thing about that was with Chile in the World Cup, but because they were worth losing 2-1 and their coach decided to lift his foot. There was no agreement. I didn’t understand it, Toni Grande explained it to me.

P. Was it really not talked about in the team before the game?

A. Absolutely. And this is good. That cleanliness prevails is always good for football.

P. Was Panenka de Ramos expected in the semifinal round against Portugal?

A. Not at all. As Boskov said, you had to have two hearts to put up with that. He hadn’t said anything, though he had done it before and would do it many times later. It is the safety of the caster.

P. When do you see that you can be champion again?

R. Quiz solidity with France or when playing again with a pure 9 against Portugal and that the team responds the same. These are things that are sometimes done by intuition. And don’t miss that!

Q. Is that final the best match you have directed?

A. Well, I don’t know. Almost everyone with Madrid was very intense. But of that dimension I think none. He was very healthy for Spanish football. We broke old complexes in games against Germany, France… That generation broke complexes forcefully. But I also want to remember the one we won in Paris on the way to the 2014 World Cup, with Valds as goalkeeper and a goal from Pedro. France needed to win and if they did it would put us in trouble. That day we were real men.

P. From that final, the 2-0 is wonderful: the start, Xavi’s pause, the pass to Jordi Alba…

A. A wonder. The play conveys the joy of playing. Football can’t always be the same rhythm, short passes always… You have to balance and Jordi gave us explosiveness, energy. At the stage in Austria I told him that he was going to be the figure of the European. He gave us, and continues to give us, a lot of air, without forgetting a Capdevila who was fantastic in every way.

Q. Did Xavi tell you in kyiv that he wanted to leave the national team?

RS He was a little uncomfortable. I think I remember walking down the stairs of the stadium with my arms around him and I said, “Do whatever you want, but I think we still have a way to go.” And I continued. There were no reasons. It is true that he was a bit shocked about playing with two midfielders. It was very difficult for me to remove Xabi or Busquets. If you have a hard time removing one, then it is better that both play. Xavi wasn’t quite convinced. That is why I say that there is no single recipe.

Q. Did I look at that moment when what happened with Xavi happened in Brazil?

A. Not at all. I was happy with them until the last moment. One of the most satisfying games of my time in the national team was the 3-0 win over Australia and Brazil, when we were already eliminated. With everything upside down, it was shown that we were a team.

R. We were that help point. I don’t believe those things about us helping to unite the country and those things, but we did bring joy to many people.

P. It is impossible to talk about Euro 2012 and not talk about what is happening today in kyiv.

A. It is terrible. I don’t know where the truth of what is happening is, but nothing can justify what is happening in the Ukraine. Under no circumstances. Whoever is right. I remember the Shakhtar field, their sports city. It seemed like a country that was going to modernity… It’s horrible. It was a wonderful championship. Football knows no borders.

P. The World Cup arrives in no time. Are you optimistic?

R. From the prudence, I believe that we are in a good position and that we must be optimistic, but always with moderation. That’s where things come from. It is not good to exaggerate in optimism or pessimism.

Q. Do you like what you see on the field?

RS We dominate the games and the team transmits good things.

Q. Do you see yourself represented in Luis Enrique when criticism intensifies?

R. It is silly to fight against that. It leads to nothing. They blamed us for not bringing Atleti players. Well, they may have been right. But we did nothing but think about the good of the selection. The selector does not lead or stops leading because someone falls well or badly. You can be wrong and there are many who deserve to be called, but…

Tags: Claro-MX/Soccer-International
Wesley Sneijder shocks the world of football with his physical change
Today’s matches May 19, 2022: Schedules, how and where to watch football live on TV this Thursday
UEFA wants to end online abuse
FOOTBALL 3141

Loading...
Newer Post
David Bustamante reveals the painful ailment for which he withdrew from the boxing evening
Older Post
its courts, among the best in South America