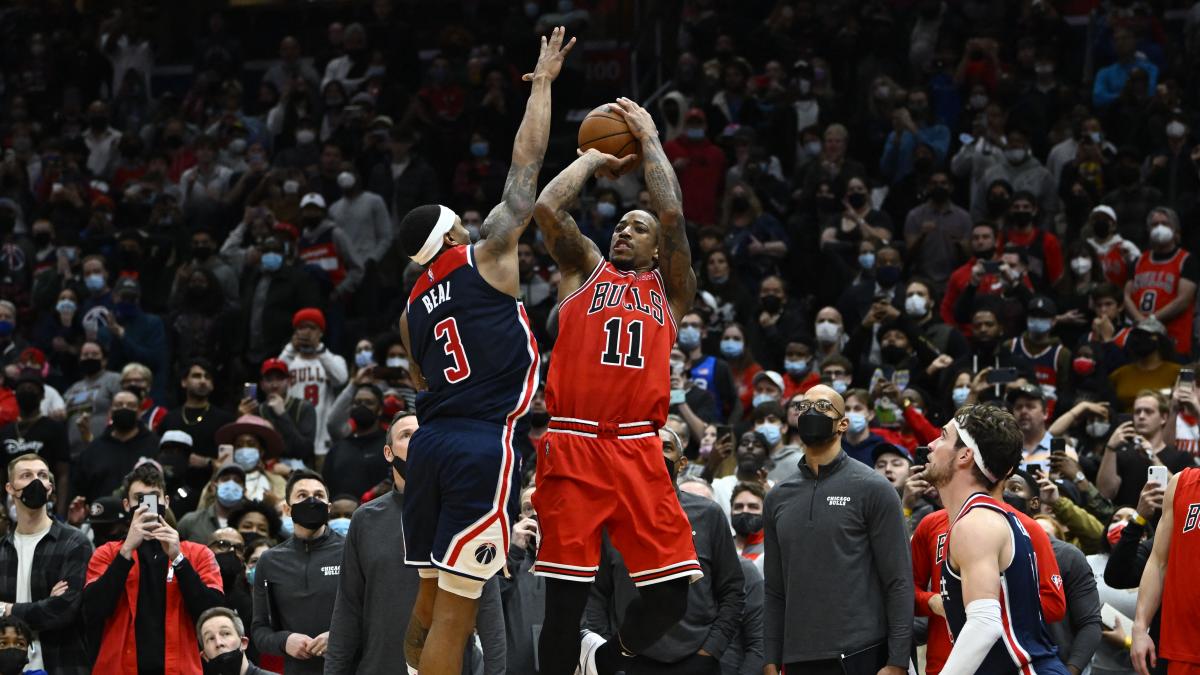 The NBA is a competition devoted to the epic, with games that often seem to be written by a screenwriter whose priority is always showmanship and heroism. This morning, DeMar DeRozen has written one of those pages that are recorded in the record books of the best basketball league in the world.

The guard has scored a triple over the horn for the second consecutive night to give the Chicago Bulls victory at the Washington Wizards court (119-120). The former San Antonio Spurs has thus become the first NBA player to achieve two baskets of three winners in two days in a row after the one achieved the night before in Indiana.

“I don’t know if I’m dreaming or if it’s real,” DeRozan said after his beater buzzer, a pointed shot and from the corner. The victory helped Chicago to add their seventh consecutive victory and position themselves as solo leaders of the Eastern Conference, taking advantage of the setback of the Brooklyn Nets. DeRozan, with 28 points, had the invaluable help of Zach LaVine (35 points, 5 rebounds and 3 assists) and Nikola Vucevic (22 points and 12 rebounds), confirming the Bulls as one of the fittest teams.

The big surprise of the night was given by the Los Angeles Clippers, who took a very valuable victory from the Brooklyn Nets court despite the fact that they came with many casualties and with all the losses. Coach Tyronn Lue couldn’t count on players like Kawhi Leonard, Paul George, Marcus Morris, Ivica Zubac, Luke Kennard, Nico Batum or Isaiah Hartenstein. Without them, the Clippers gave a lesson in collective dedication and sacrifice to bring down the Nets. With this loss at home, the Nets have two lost games in a row for the first time all season.

Eric Bledsoe (27 points, 3 rebounds, 4 assists and 3 steals), Reggie Jackson (19 points, 3 rebounds and 3 assists) and Terance Mann (19 points and 3 rebounds) were the most outstanding of the Angelenos while James Harden ( triple-double with 34 points, 12 rebounds and 13 assists) and Kevin Durant (28 points and 9 rebounds) were the most successful for the Nets. Spanish center Serge Ibaka started for the Clippers and had 4 points, 4 rebounds, 3 assists and a block in 22 minutes.

Warriors lead in the West

In the Western Conference, the Golden State Warriors hit the table with their victory over the Utah Jazz in a duel in style. Steve Kerr’s men broke the Jazz’s six-game winning streak after a volcanic and passionate game that was full of alternatives.

Campazzo, in a defensive action against the Rockets

In a night full of games to open the basketball year in the United States, the performances of Giannis Antetokounmpo also stood out, achieving a triple-double (35 points, 16 rebounds and 10 assists) in the Bucks’ victory over the Pelicans. The Spanish center Willy Hernangómez came out in the starting five of the New Orleans team and had a remarkable performance with 11 points, 8 rebounds and an assist in 20 minutes on the court in the defeat of his team.

Argentine point guard Facundo Campazzo also shone, who achieved the best numbers since landing in the NBA with 22 points (with 7 of 11 in shots and 3 of 5 in triples), 12 assists, 4 rebounds, 5 steals and 2 blocks. The ex-Madridista started as the starting point guard for the Nuggets in the game that Denver beat the Houston Rockets.


Chris Paul’s greatness explained with NBA stats
DUX Gaming enters the NBA 2K League through a team based in Mexico
Rudy Gobert, option to do something never seen in NBA statistics
NBA 1303

Loading...
Newer Post
NBA: Klay Thompson is already scared with his grimace: 24 triples in a row like nothing!
Older Post
Jake Paul to the UFC? He asked for better conditions for the fighters and challenge a legend