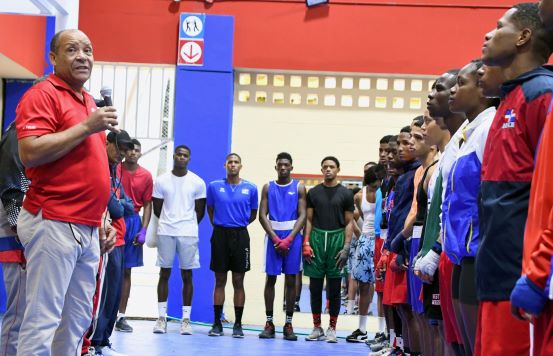 Santo Domingo, March 11.- The Dominican Boxing Federation (Fedoboxa) announced that it held a national championship in which 28 young people were recruited with the purpose of, together with more experienced boxers, forming a “new” national team with a view to to the current Olympic cycle.

The entity specified that the Bolivarian Games in Valledupar, Colombia, to be held in June and July, will present a “renewed” template in some categories.

“These athletes are the ones who will be in this new Olympic cycle. We are working with this pre-selection to arrive strong at the Bolivarian Games,” the head of the Fedoboxa coaches, Cuban Armando Hernández, said in a statement.

Prior to their participation in the Bolivarian Games, the Dominican boxers are getting ready to compete in the Continental Tournament, which will take place in Guayaquil, Ecuador, at the end of March.

The technician indicated that currently the pre-selection has two boxers for each weight, with the intention of measuring the levels of each of them during the preparation process, with the goal of “bringing a strong team” to international events.

“We know the commitments there are and the little time we have. We are preparing ourselves because we will have a lot of competitions and it is a tight cycle, so we are meeting the necessary requirements for the next commitments”, Hernández specified.

The coach said he is aware of the responsibility that exists on Fedoboxa due to the expectations that are generated around the participation of Dominican boxers, every time they represent the country in regional and world events.

“It puts some pressure on us, that’s why we are training hard, because these are new guys and we want them to improve their technique, their tactics, their way of fighting and all aspects of their preparation to keep the country at a good level as we have done. in recent years,” he added.

He recalled that the team still has several figures who were in the last cycle and obtained “outstanding participations” such as the cases of Rodrigo Marte, Alexy de la Cruz, Miguelina Hernández and María Moronta, who competed in the Tokyo Olympics.

“The intention is to match the level of all, having as a goal that the most novice can produce results, choosing and contributing medals by representing the country,” he considered.

Boxing gave the Dominican Republic its first medal in the Olympic Games with the bronze that Pedro Julio Nolasco won in Los Angeles in 1984.

Naoya Inoue, the best boxer in the world | The Japanese defeated the Filipino Nonito Donaire by technical knockout
Canelo Alvarez. How to Work in Boxer’s Upper by Energy Stores
River experienced a magical night of boxing last Friday at the club’s micro-stadium
BOXING 4245

Loading...
Newer Post
Nets vs. 76ers | NBA 2022: James Harden lives a nightmare against his ex: fatal game and injury against the Nets. Do the ghosts of the Playoffs revive?
Older Post
NBA: The most emotional and applauded gesture of Stephen Curry with a girl