Dominican Horford, hero of Game 1 of the NBA Finals 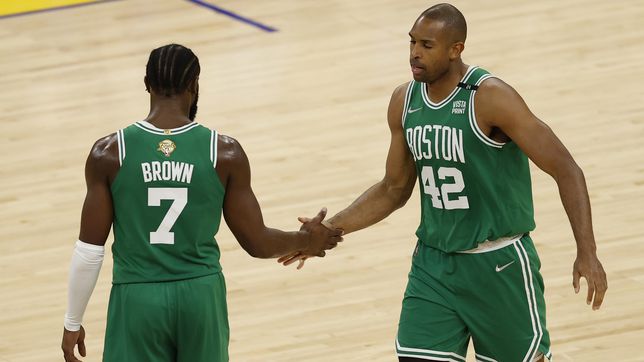 Al Horford had to wait 15 years to make his NBA Finals debut. The wait was worth it.After 141 playoff games and a long career in professional bask

Al Horford had to wait 15 years to make his NBA Finals debut. The wait was worth it.

After 141 playoff games and a long career in professional basketball, the Dominican center became the hero of the Celtics with 26 points in Game 1 of the Finals, which Boston won 120-108 against the favorite Golden State Warriors.

It may interest you – NBA Finals 2022: History of Celtics and Warriors in the finals

Horford’s six 3-pointers were also a career high and the most 3-pointers by a NBA Finals rookie.

“We keep playing, (the Warriors) are a great team and for us it wasn’t the best game, but we keep fighting and find a way to win this game,” said Horford, the first Dominican to play in the NBA Finals, at the end of the duel in San Francisco.

“I am grateful for this opportunity. I am excited, delighted to share this with our group of boys, ”she acknowledged.

Within hours of his birthday, he became the second-oldest player to debut in the Finals with 25 or more points.

Despite a tremendous start by Steph Curry, with 21 points in the first quarter, and trailing by 15 points in the third, the Celtics reacted with an impressive fourth quarter, which they won 40-16.

“Golden State did a great job in the third quarter. For us the key was (Jaylen) Brown, because of how he started the fourth quarter and that was the start of something for us. That gave us confidence and we continue to grow,” said the native of Puerto Plata.

He also showed his total confidence in Jayson Tatum, who this Thursday only contributed 12 points (three of 17 in field goals).

“Those guys are expected to score, create play, pass the ball. Tonight, despite not being able to score much, (Tatum) released the teammates and that shows the growth of him. He is the type of player that is always going to get the results”, he considered.

Al Horford has become one of the most beloved players in the Celtics’ locker room, a team he returned to this season after spending a year in Philadelphia and another in Oklahoma City. Horford began his career in Atlanta, where he played nine seasons, before signing with Boston, where he spent three years, between 2016 and 2018.

That is why players like Marcus Smart want to give the Dominican his first NBA title.

“Nobody deserves to be here more than him, because of how he takes care of himself, because of his professionalism. He keeps putting together great games, that’s what he does for us,” said Smart, the Defensive Player of the Year.

Game 2 of the NBA Finals is on Sunday at the TD Garden in Boston.

Phoenix Suns – Golden State Warriors, live
PlayOffs NBA 2022: An immense Jimmy Butler (41) executes the Celtics and opens the Eastern final for Miami
The NBA stirs the hornet’s nest with a 10% increase in the salary limit
NBA 2878