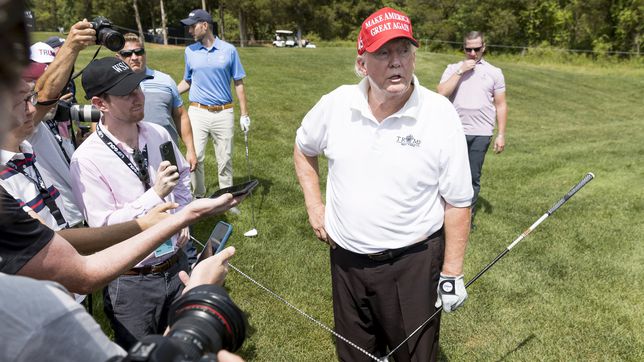 This morning LIV Golf's pro-am is held in New Jersey in which both professional players and some personalities who love golf compete together. In

This morning LIV Golf’s pro-am is held in New Jersey in which both professional players and some personalities who love golf compete together. In this tournament, there are several non-professional guests who play golf, such as former basketball player Charles Barkley or former athlete Caitlyn Jenner. But on this date one of the most controversial characters in the world has joined. Former United States President Donald Trump.

As is well known, the former president of the United States is one of the most influential characters in his country. Trump attended the tournament’s welcome party last Wednesday night, where he was joined by LIV CEO Greg Norman. Donald Trump, previously, had already postulated in favor of the controversial league: “all those golfers who remain loyal to the disloyal PGA will pay a great price when the inevitable merger with LIV comes. They won’t get anything except a ‘thank you’ from the PGA officials who will be making millions a year.”

Also, on Friday begins the third date of the LIV, where 48 players will compete in teams of four. The tournament takes place at the ‘Trump National Golf Club Bedminster’, a complex built and owned by Donald Trump. Notable golfers include Dustin Johnson and Bryson DeChambeau. Two of the emblematic players of this new league.

The tournament will also feature several Spanish golfers. There are three who will be present on this date of the LIV. Sergio García will be present after having resigned from the DP World Tour and corrected himself in recent days. The man from Castellón is one of the most outstanding golfers in the tournament due to his successful career in the world of golf. On the other hand, two young Spanish golf talents will also compete. David Puig Currius and Eugenio López-Chacarra. The latter, having already made his participation official in the 2023 LIV circuit.