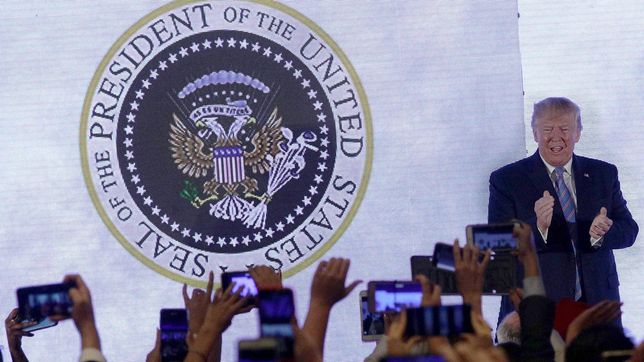 The golf course called Trump International Club, in West Palm Beach, Florida, would have violated a law of the United States government by using th

The golf course called Trump International Club, in West Palm Beach, Florida, would have violated a law of the United States government by using the presidential seal, the use of which is prohibited.

On April 21, an Instagram user posted a photo of the seal at the Trump International Golf Club in West Palm Beach, Florida. The image shows a circular, blue and silver marker placed in very short grass, and an accompanying caption reads: “45th President 45 yards from hole on 18″.

It is against the law to use the presidential seal in a way that might give the impression of government approval or sponsorship of private sector companies. The West Palm Beach golf club is the fourth Trump property to feature the seal in a possible violation of the statute.

YOU MAY ALSO BE INTERESTED: The 5 active athletes with the greatest fortunes in the USA

According to Forbes, the violation of this law can represent a sentence of up to six months in prison, although prosecutors do not usually give priority to this type of crime.

Trump’s West Palm Beach club is where the former president goes when he resides in nearby Mar-a-Lago.

At the time, the Trump Organization blamed the incident on die-hard supporters and quickly got rid of the markers. “The plaques were presented to the club by a small group of members, who are incredible fans of the president, in honor of Presidents Day weekend,” the company said in a 2018 statement to the podcast.

Minjee Lee wins the US Open and 1.8 million, the largest prize money in the history of women’s golf
The Professional Golf Tour arrives in Puebla with great surprises
Feat of Alejandro del Rey, with 58 hits and 14 under par
GOLF 983