Doncic continues to make history in the NBA 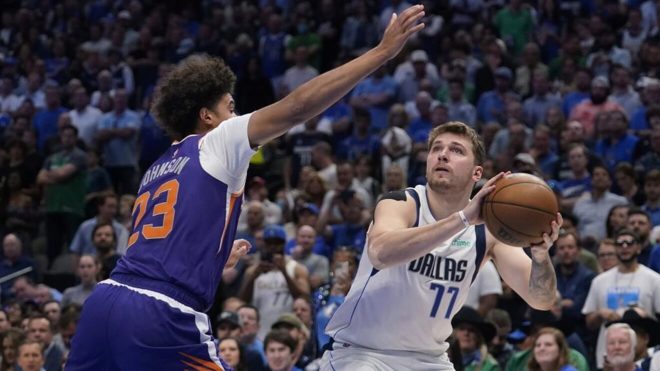 Doncic, during a game with the Suns App32'1+9'8+6'3. A stat line sensational that leads Luka Doncic to seek to face the most difficult yet. A seven

Doncic, during a game with the Suns
App

32’1+9’8+6’3. A stat line sensational that leads Luka Doncic to seek to face the most difficult yet. A seventh party – the smumm in the NBA Playoffs– before the dominator of the Western Conference, the Phoenix Suns, after saving the first ‘matchball’ at the American Airlines Arena and further inscribe his name in NBA history.

Wilt Chamberlain and Michael Jordan are not companions of little substance in any statistical section in the NBA. One, he was the first ‘God’ – 100 point performance. The other is ‘God’, with his six rings and everything that figure means today. Well, Doncic has only taken two more games than them (22), equaling Bob McAdoo, to reach 700 points in playoffs. After showing off and forcing the seventh against the Suns.

Luka’s 33 being able to be eliminated is also another demonstration of his value when it comes to a ‘kill-kill’. He averages 39 points per game in knockout games for his team. Against the Suns he will have a new opportunity, and in view of the difficulties of Chris Paul generating game and Mikal Bridges to cover the Slovenian will have options.

Does Luka have room for improvement for what’s coming? Yes. Doncic is not being the best from the perimeter and there will remain one of his keys to the future of the Slovenian and his Mavs in the season. To date marks as best record 5/10 in the second match, and is coming off two in a row at 2/8.

And he has a team. In the sixth match, hehe Mavs showed their commitment on defense to the Suns throughout the game. And they contributed throwing, with figures like Bullock -increasingly established as a ‘bargain’ of the market-, Kleber or Brunson. Therein also lie your opportunities.

Thus, Doncic returns to write his name in the history of the post-season. He is measured to a major challenge, with many possibilities of being able to access a conference final overcoming the best team in the West, the Suns. The Slovenian has a plan.