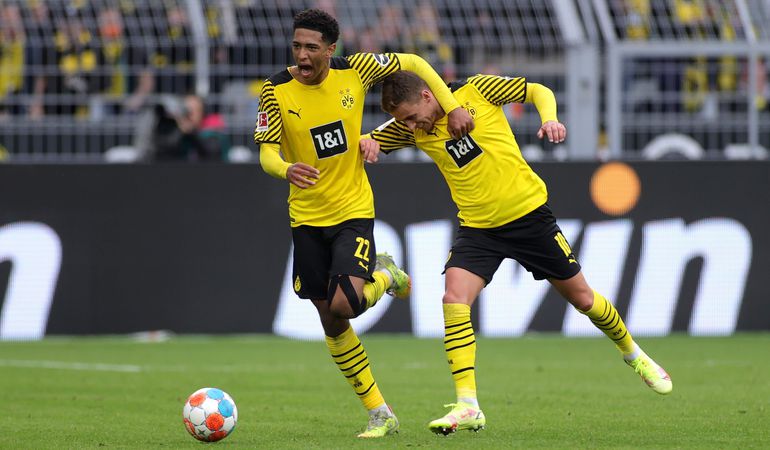 BERLIN. Borussia Dortmund (2nd) and Freiburg (3rd) won their matches of the seventh date of the Bundesliga this Saturday and were one point behind

BERLIN. Borussia Dortmund (2nd) and Freiburg (3rd) won their matches of the seventh date of the Bundesliga this Saturday and were one point behind leaders Bayern Munich (16 points), who will host Eintracht Frankfurt (14th) on Sunday.

And in Wolfsburg (5th), Sevilla’s recent rival in the Champions League (1-1), Borussia Mönchengladbach (9th) won 3-1, ending a 19-year curse without winning on the ‘Lobos’ court. ‘. A result that confirms the improvement of ‘Gladbach’ after having beaten Borussia Dortmund a week ago (1-0).

In a weekend in which so far 18 goals have been seen in the five games played in the highest category of German football, Borussia Dortmund added their fifth victory in seven dates, beating Augsburg 2-1 (15th ) despite not being able to count on the injured Erling Haaland.

The 21-year-old Norwegian comes out this season at an average of more than one goal per game, and his physical power creates a point of support and fixation for opposing defenders that the team led by Marco Rose misses in his absence.

But Borussia Dortmund makes up for it with their seriousness and solidarity. And with the good performance of captain Marco Reus, the Dutch international Donyell Malen and the German Julian Brandt.

Brandt himself scored 2-1 on Saturday in the 51st minute against Augsburg, a team that does not finish leaving the danger positions.

Borussia Dortmund, in front of 40,000 spectators (50% of the stadium’s capacity), opened the scoring in the 10th minute through the Portuguese Raphaël Guerreiro, from a penalty kick.

But the Bavarians equalized before the break through the Swiss Andi Zeqiri (35).

After Rose’s talk at half-time, the locals presented another face at the restart and Brandt returned the lead on the scoreboard with a low left-footed shot.

With the same 15 points and still not knowing the defeat is Freiburg after winning 2-1 in Berlin against Hertha (13th), with goals from Austrian Philipp Lienhart (17) and Nils Petersen (78).

In Wolfsburg, Mönchengladbach’s Borussia took the lead with a goal from Swiss international Breel Embolo, who could be a candidate for goal of the year: a perfect Chilean from within the small area.

Two minutes later, the young international Jonas Hofmann doubled the lead (7), but Wolfsburg reached the break with just one goal behind (24).

As the minutes passed, the game became ‘heating up’ and the local French central Maxence Lacroix was sent off in 76 for a foul inside the area. Lars Stindl missed from eleven meters against Belgian goalkeeper Koen Casteels.

With 10 men Wolfsburg did not give up and went on the attack, but received a third goal against the American Joe Scally (90 + 5).

For their part, Stuttgart (12th) defeated Hoffenheim (11th) 3-1, while in the last game of the day, Leipzig seems to recover from their bad start to the season and rose to seventh place after thrashing 3- 0 to Bochum, seventeenth and penultimate, with two goals from Frenchman Christopher Nkunku and one from Portuguese André Silva.

Loading...
Newer Post
The first Ladies’ Patagonia Open is launched – Municipality of Trelew
Older Post
Ministry of Sports assures that it carries out negotiations for Ecuadorian MMA fighters who need a Mexican visa | Other Sports | sports