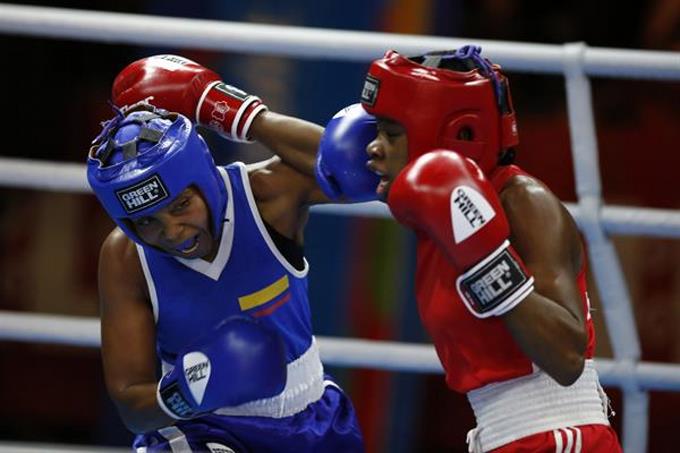 Colombia was crowned boxing champion at the XIX Bolivarian Games after winning this Thursday seven gold medals of the thirteen that were played on the final day, held at the Parque de la Leyenda Vallenata.

From the first fight of the evening, the harvest of gold for the locals began to take shape with a convincing victory by Yuberjen Martínez, to whom the judges gave a score of 5-0 over his rival, the Venezuelan Miguel Antonio Ramos, to whom he connected several blows, especially in the first two rounds, so the referee stopped the fight twice to make a protection count.

“That affected me a lot,” Ramos said after the loss.

Martínez, Olympic runner-up in 2016, chose direct boxing to capitalize on his third Bolivarian title in the flyweight category (48-52 kg) after his conquests in Trujillo 2013 and Santa Marta 2017.

“This gold means a lot, the third in the Bolivarian Games. It’s a great start. The Olympic dream hasn’t died. I have that feeling of revenge. I’m preparing for what’s to come,” Martinez told reporters.

The bronze in this category went to the Ecuadorian Luis Fernando Delgado and the Panamanian Martín Pérez.

The other Colombian gold came with Yilmar González after winning by unanimous decision over Ecuadorian Jean Carlos Caicedo, in featherweight (52-57 kg). The bronze medal went to the Dominican Rodrigo Marte de la Rosa and the Peruvian Darwin Pérez.

The third gold medal for the locals was achieved by Cristian Salcedo by beating the Chilean Miguel Ángel Veliz in super heavyweight (+91kg). The bronze was in the hands of Ecuadorian Gerlon Gilmar Congo and Bolivian Ever Quisbert.

In the fights in the women’s branch, another celebration came for the Colombians with the gold of Ingrit Valencia, medalist in Rio 2016, after beating Dominican Miguelina Hernández 5-0 in the flyweight category (48-51 kg). With the bronze were the Venezuelan Tayonis Anaonis Cedeño and the Guatemalan Aylin Jamez.

Then her compatriot Yeni Arias did not disappoint and beat Venezuelan Omailyn Alcalá in featherweight (54-57 kg). The Dominican Estefani Almanzar and the Paraguayan Minerva Montiel were third.

RD stood up and celebrated

The good appearance of the Dominican Republic began with the boxer Alexy de la Cruz with his victory by split decision against the Colombian José Manuel Viáfara in the lightweight category (57-63 kg). The third place on the podium went to the Venezuelan Jesús Cedeño and the Peruvian Leodan Pezo.

“I faced a technical boxer, a wise boxer. You had to make a strategy. I marked him first to take the advantage and be able to get the victory,” said De la Cruz.

In the middle (69-75 kg), the Dominican Euri Cerdeño delivered another gold to his delegation after winning his fight with the Ecuadorian José Vinicio Mercado with a score of 5-0. The bronze went to the Colombian Diego Alejandro Motoa and the Venezuelan Diego Pereira.

The good streak continued for Dominicans Cristian Pinales with his unanimous decision victory over Colombian Jorge Vivas at light heavyweight. The bronze was awarded to the Venezuelan Nalek Korbaj.

Meanwhile, the boxer Julio Castillo gave Ecuador the only gold medal with his victory against the Colombian Marlon Hurtado in the heavy category (81-91 kg). The bronze went to the Peruvian José María Lucar and the Chilean Andrews Nicolas Salgado.

Venezuela was also showered with gold after the triumph of Cristian Palacio in his fight against Ecuadorian José Gabriel Rodríguez in welterweight (63-69 kg), which left Paraguayan Rodrigo Denis and Panamanian Eduardo Teodoro with the bronze.

In the last match, the Panamanian Atheyna Bylon won the gold by beating the Venezuelan Maryelis Yriza 5-0 in the medium category (69-75 kg). Ecuadorian Erika Stefania Pachito and Guatemalan Zulena Álvarez took the bronze.