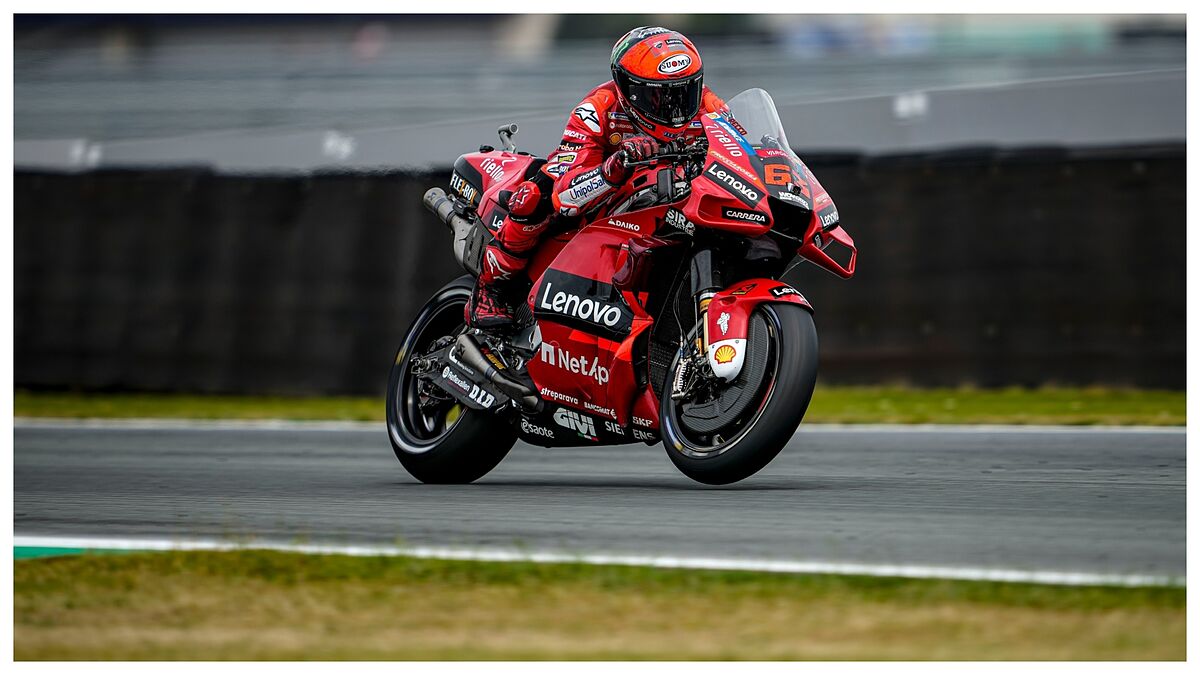 Pecco Bagnaia achieved MotoGP pole in Assen. She has 17 in total, 10th in the queen class. Another, with record. Disappointment for Aleix, who w

Pecco Bagnaia achieved MotoGP pole in Assen. She has 17 in total, 10th in the queen class. Another, with record. Disappointment for Aleix, who was angry about being fifth.

Pol Espargar was low. The pain in his ribs from the fall of Germany forced him to go home.

Conditions were good, but threatening by clouds That made everyone look up to the sky. It was 21 degrees in the environment and 28 on the asphalt.

Q1 started badly for Bastianini. His Ducati GP21 stopped as soon as he left, at the exit of the ‘pit lane’. He was running to the box for the second unit. His problem was that she was prepared for wet conditions and had to wait for it to be remade.

In case it rained, since it had sparked in some area, everyone came out ready to push from the start.

The KTMs surprised by taking the lead in those initial stages, with Oliveira and Brad Binder. This put pressure on Joan Mir, who was at the gates.

Bastianini was finally able to get out. The problem is that it was already reported that it was raining in one of the sectors. They were small droplets, which, at first, did not affect. The others did a very quick change of tires.

Mir had an accident in turn 5. He had a vibration in the front and I couldn’t control it. He was able to start the Suzuki and come back. Full pressure.

Brad Binder raised the bar and could with Oliveira. Mi made the effort, but lost it in the second part of the track. Marini didn’t come either. Brad Binder and Oliveira passed. The second part of the grid will be: 13 Marini, 14 Mir, 15 Di Giannantonio, 16 Bastianini, 17 Dovizioso, 18 Bradl, 19 Gardner, 20 Morbidelli, 21 Lex Márquez, 22 Savadori, 23 Ral Fernández and 24 Darryn Binder.

The uncertainty in case the sky unloaded caused that in Q2 nobody left a second in the box.

Fabio Quartararo set a great 1:31.7, but immediately Jorge Martn beat him going to Bezzecchi’s wheel. The man from Madrid breaks the historical record of Assen, leaving behind that of Viales in 2021, in his last pole position with Yamaha.

The Frenchman was going long, on the gravel of turn 1. He did not fall, but he had to look for the garage. Aleix Espargar and Maverick Viales weren’t very high either.

Bagnaia left early for the last attempt. Instead, Quartararo was expected to be the last.

Pecco smashed the clock set by Martin. Bezzecchi, at his wheel, climbed.

Jorge Martn went to the ground at turn 5. He was left without pole. Bagnaia went into her box and all she had to do was wait. Miller had an incident at Turn 3. He too was getting out of the fight. The yellow flags were doing his partner a favor.

Quartararo was placed second. He then made a ‘save’, but had to abort the lap. Aleix could not climb and Viales did not endorse all the good seen in free practice in one lap. Pole was for Bagnaia, another record holder. He has four and in all four he broke the track record: Jerez, Le Mans, Sachsenring and Assen. Almost nothing. Then he needs to finish off in the race.

Miller risks a penalty for hindering Maverick. He even went to Aprilia to apologize.