“Dynamite” will be in the Boxing Hall of Fame 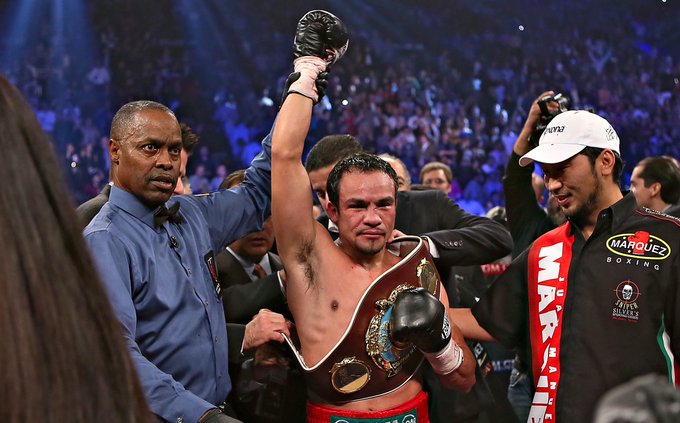 The Mexican boxer, Juan Manuel Márquez, will join the great legends of world boxing in a recognition that will take place in Canastota, New York.

One of the most important boxers in Mexico in recent times, will be inducted into the International Boxing Hall of Fame, thanks to his outstanding career.

Juan, along with other characters, had to wait a couple of years to be recognized in the immortals’ compound due to the health crisis caused by Covid-19.

The event consists of two days of activities that will take place in the small New York town, figures such as: Floyd Mayweather, Wladimir Miguel Cotto, Roy Jones Jr. and Shane Mosley will join this recognition along with Márquez.

Until now there are only 23 Mexicans who are members of the Hall of Fame: Marco Antonio Barrera, Julio César Chavez, Erik Morales, Óscar de la Hoya, among others.

The boxer from the capital was active from 1993 to 2014, during which time he conquered four categories, leaving a record of 56 wins, seven losses and one draw, adding a total of 40 knockouts. After 19 years as a professional he decided to hang up the gloves in a win over Mike Alvarado in his last contest.

His most important victories in the ring were against world champions Orlando Salido, Marco Antonio Barrera, Cuban Joel Casamayor, Jun Díaz and the most striking one over Manny Pacquiao in six rounds, an event that was recorded in boxing history.

It may interest you: Arturo Brizio will leave the Arbitration Commission

Tags: CMB, New York, World Boxing
Freddie Roach: “Boxing and Puerto Rico should be very proud of him”
“Cap Bori” has already arrived in Canastota in uniform to celebrate the exaltation of Miguel Cotto
Miguel Cotto and Macho Camacho will be inducted into the Boxing Hall of Fame in Nevada
BOXING 3166