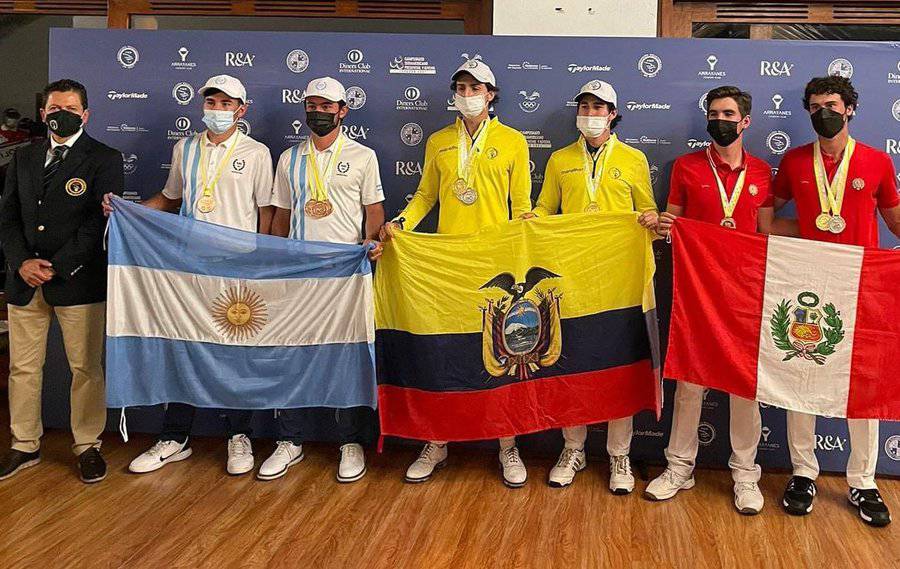 Tournament was played in individual, couples and mixed categories. The tricolor title was achieved with Philippe Thorin and Renato Naula.October 2

Tournament was played in individual, couples and mixed categories. The tricolor title was achieved with Philippe Thorin and Renato Naula.

The teams from Ecuador and Colombia, in the youth category, and from Paraguay and Peru, in the junior category, were left with the titles of the South American Junior and Youth Championship Ecuador 2021, a tournament played at the Arrayanes Country Club, in Quito.

Philippe Thorin and Renato Naula made up the winning couple in the men’s division of the youth category. The nationals obtained the gold medal after four days of competition and after finishing the course of the court with 429 strokes.

An incorrect score signed by one of its players led to the disqualification of Chile, which until that moment was leading in the order, with which Naula and Thorin went on to lead the contest, for a historic tricolor presentation, with the first title reached in 53 disputed editions of the Sudamericano Juvenil.

Peru placed second and Argentina completed the podium. The teams from Paraguay and Venezuela were placed together in the fourth box.

In singles, Thorin took second place, behind the Peruvian Alejandro Ramos, who surpassed him in the tiebreaker items (last nine holes) and due to the impossibility of playing a playoff due to lack of natural light. The two athletes added 287 strokes, accompanied in the third place by Argentine Juan Martín Loureiro.

Ecuador also rose to the podium with Isabela Yu Lee and Valentina Guarderas, bronze in women’s teams, after Colombia and Brazil.

In the mixed category, the Peruvian duo of Ximena Benites and Jaime Yzaga took the gold, followed by Argentina. (D)

Provisional Ball from Bay Hill, from the home of the king of golf
Cantlay, best player of the year ahead of Rahm
Fifteen players from the world top 100 have pre-registered for LIV Golf
GOLF 982