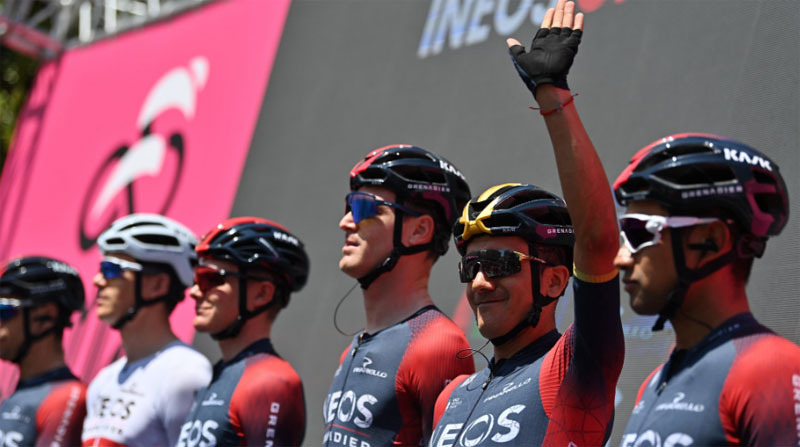 The Ecuadorians of Ineos, Jhonatan Narváez (right) and Richard Carapaz at his side in the Giro d'Italia 2022. Photo: Twitter @giroditalia

The Ecuadorians of Ineos, Jhonatan Narváez (right) and Richard Carapaz at his side in the Giro d’Italia 2022. Photo: Twitter @giroditalia

football clubs and Ecuador National Team congratulated Richard Carapaz this May 21, 2022, after the athlete assumed the leadership of the Giro d’Italia.

Finished the stage 14 of the race, the Ecuadorian rose from second to first place, and took a seven-second lead over the Australian Jay Hindley.

He finished the day in third place, which also served to get a good advantage over his followers in the general. The time he records in the cycling lap is 58:21:28.

By placing himself as leader, the Ecuadorian received the ‘mpink aglia, clothing worn by pointer of the contest. Given the fact, Carapaz became a trend in the country and the football environment did not miss the opportunity to provide a recognition.

Among the institutions that extended and dedicated a publication to him are teams from the Series A and B of the Pro League. The Tri He also reacted through his social networks.​

Among the squads that demonstrated, the one with the greatest weight and the one that had the most movement around the event was Valley Independent. the box of Sangolquí made two publications.

The first was an illustration showing Carapaz in a painting in which he wore the national colors. In the second, he celebrated the victory and alluded to the mesh obtained by the athlete with his alternate t-shirt

You look the 👚 Mijin @RichardCarapazM
Pepa have a t-shirt 👚😜 pic.twitter.com/TTgQKkPGRr

The October 9 He said he was proud of the Ecuadorian’s participation. In turn, the America of Quito retweeted the publication of INEOS Grenadiers, the Ecuadorian team, and put the phrase “Come on Richie!” accompanied by hearts.

The Ecuadorian soccer team It echoed the sporting achievement through its official channels. Unlike the clubs, he only used emoticons and a gif in which the tricolor salutes.

The figures show a clicker along with a locomotive and the flag of Ecuador. These are accompanied by the hashtag “#Carapaz“.

this is the anthem of the Copa del Rey soccer played by Alaska and Mario Vaquerizo
Colombians, on stage in the football of Europe | THE UNIVERSAL
The signing presented as CR7 in the MLS
FOOTBALL 2705

Loading...
Newer Post
Boxing: defeats of the Argentine representatives in England
Older Post
Rawson’s boxing is experiencing a great moment and celebrated it with a new festival