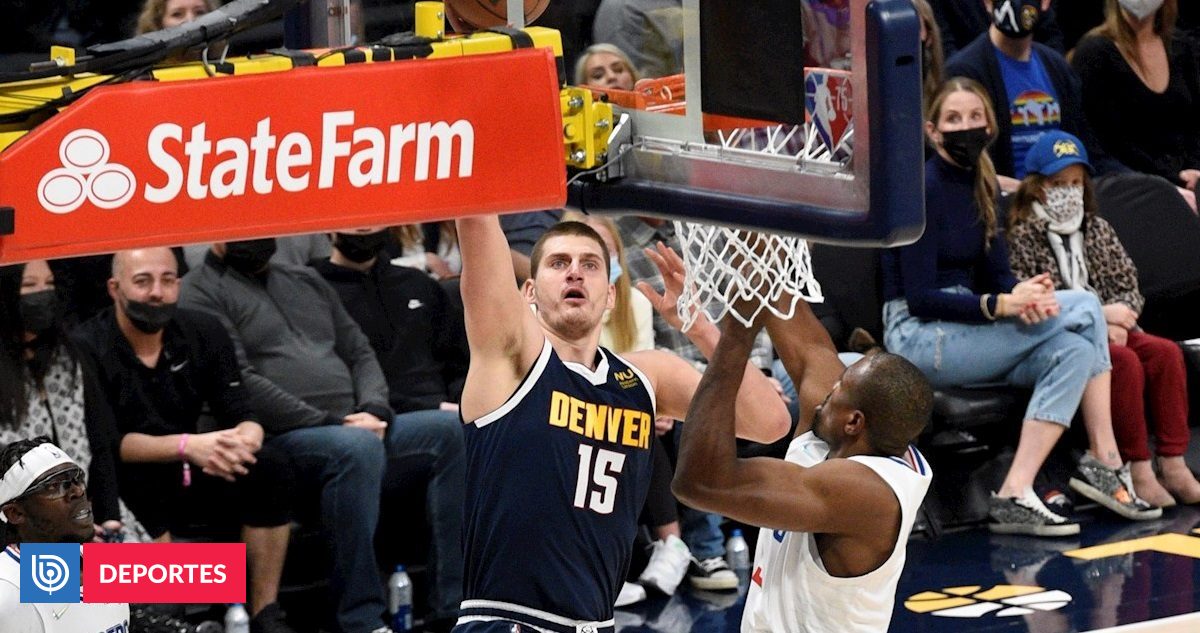 Nikola Jokic and Joel Embiid were the big stars of a new NBA night, where the Lakers were once again victims of their own mistakes

Nikola Jokic and Joel Embiid were the big stars of a new NBA night, where the Lakers were once again victims of their own mistakes.

Joel Embidwith 50 points, and Nikola Jockicwith 49, were the main protagonists of a day in the NBA in which the Los Angeles Lakers failed again and the Dallas Mavericks of a fantastic Luka Doncic extended their great streak on the rise.

With 13 games and very succulent confrontations, this Wednesday in the NBA also left the victory of the Milwaukee Bucks over the Memphis Grizzlies, the recovery of the Chicago Bulls after four straight losses, the confirmation of the Miami Heat as a fearsome rival in the East and the depression of some Utah Jazz that do not lift their heads.

An impressive and spectacular Joel Embidwith 50 points and 12 rebounds in just 27 minutes of action, was too much for some Orlando Magic (123-110) They are still the worst team in the NBA.

The pivot of the Sixerswho equaled the best scoring mark of his NBA career and only played 58 seconds in the fourth quarter as the game was totally decided, is in exceptional form and has led the Philadelphia franchise to win 8 of his last 10 games.

Joel Embiid is a problem! He joins “The Answer” (Allen Iverson) and Wilt Chamberlain as the only @sixers with multiple 50 point games!

A gigantic triple-double of Nikola Jockic (49 points, 16 of 25 shooting, 14 rebounds and 10 assists) catapulted the Denver Nuggets to a very close victory and after an extension over Los Angeles Clippers (130-128), who had a three-pointer at the buzzer by Reggie Jackson to earn the win.

Ivica Zubac (32 points with 15 of 19 shooting and 10 rebounds) stood up to Jokic in the zone while the Spanish Serge Ibaka played 14 minutes in which he got 7 points, 6 rebounds and 3 assists.

The Argentine Facundo Campazzo went without scoring and grabbed 2 rebounds in 9 minutes on the court.

Nikola Jokic was a force in the @Nuggets thrilling overtime win! pic.twitter.com/ukKVYlkfwY

Los Angeles Lakers They made a fool of themselves on their court against the Indiana Pacers (104-111), who had only won one of their last ten games and who swept the purple and gold in the last quarter (24-35).

LeBron James (30 points, 12 rebounds and 5 assists) was the best of the Lakers whose coach, Frank Vogel, is on the tightrope.

Caris LeVert, with 22 points in the fourth quarter (30 points and 8 rebounds), was the benchmark for some Pacers in which Dominican Chris Duarte had 11 points, 5 rebounds and 3 assists in 32 minutes.

turning it 🔛 in crunch time!@CarisLeVert scores 22 of his 30 PTS in the fourth quarter to lead the @Pacers to the comeback W! pic.twitter.com/0gR08omOFD

Luka Doncić touched the triple-double (41 points, 14 rebounds and 7 assists) and hit a decisive triple with a minute to go that was key for the Dallas Mavericks they will knock down the Toronto Raptors.

The Mavericks, who have had four wins in a row and nine wins in their last ten games, stopped a Raptors in which Pascal Siakam stood out (20 points and 8 rebounds).

Luka lights up the scoreboard for a season-high ✨@luka7doncic goes for 41 PTS, 14 REB and 7 AST to lead the @dallasmavs to the W! pic.twitter.com/SOgqUTNo5Y

Bucks bounce back in the NBA

Giannis Antetokounmpo (33 points, 15 rebounds and 7 assists) propelled the milwaukee bucks to an important victory against the surprise of the season, the memphis grizzlies by Ja Morant (33 points, 8 rebounds and 14 assists).

Khris Middleton (27 points, 7 rebounds and 7 assists) and Jrue Holiday (9 points, 5 rebounds and 4 assists in his return after six games away) supported the Greek star against Grizzlies in which Desmond Bane was sidelined by coronavirus , Kyle Anderson and Tyus Jones.

After four straight losses, the chicago bulls reacted with a crucial victory against the Cleveland Cavaliers to retain the lead in the East with the Miami Heat.

DeMar DeRozan (30 points, 2 rebounds and 7 assists) led the Bulls against a Cavaliers who came shooting after five straight wins and in which Lauri Markkanen shone (28 points and 7 rebounds).

🏀 30PTS | 7AST | 2 BLK@DeMar_DeRozan was getting buckets in the @chicagobulls win! pic.twitter.com/uBeT8TNpAO