Entrepreneur. A soccer globetrotter challenges the big hamburger chains with his brand: he has 5 stores and 50 employees 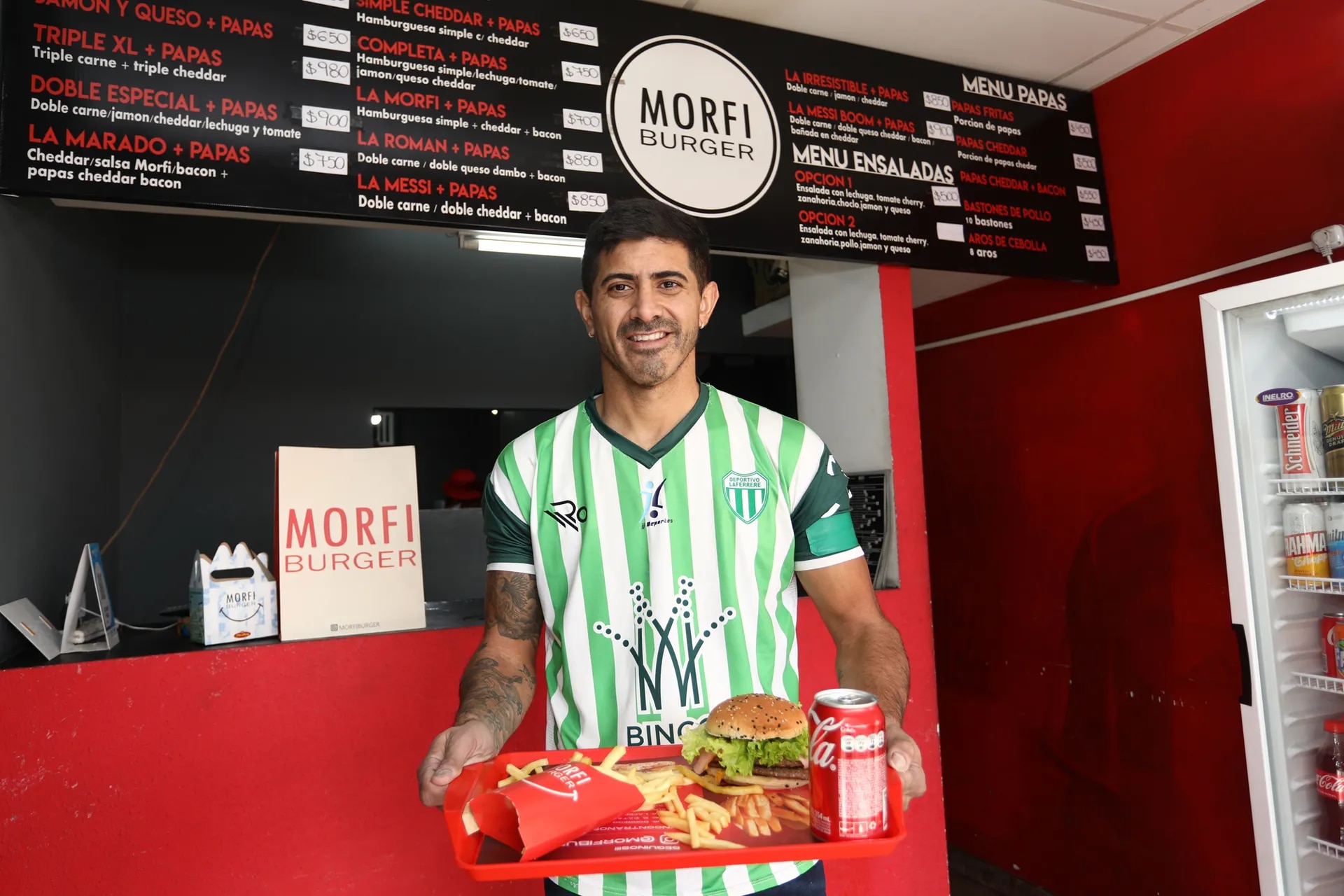 Well to the west of the Federal Capital, where the suburbs begin to intermingle with the first fields, a former soccer player breaks the hamburger

Well to the west of the Federal Capital, where the suburbs begin to intermingle with the first fields, a former soccer player breaks the hamburger market. This is Diego Jaime, a globetrotter who played baseball in different promotion clubs, emigrated to Europe young and today challenges Mc Donald’s, Burger King and Mostaza, the greats of the category.

He was born in Laferrère. He attended primary and secondary school at the José María Plaza school. He trained as a soccer player in the youth teams of Almirante Brown. He was 13 years old when San Lorenzo, one of the big clubs in our country, bought his pass. He paid him 20 balls. However, he never got to play in the first division. He debuted in promotion, where he made a large part of his career, and fulfilled the dream of every footballer: “playing in Europe”. However, Diego Jaime had a more exotic destination than Lionel Messi or Paulo Dybala: Bosnia and Herzegovina. His file was worth 600 thousand euros, according to the site Transfermarkt.

But the ball “barely” helped him secure his financial well-being. In 2019, at 33 years old, plagued by injuries, he was relegated in the consideration of the coach of his last club, “The Viller” [por Deportivo Laferrere]. He tried to recover, but the pandemic came and he resigned himself. To support himself financially, he opened a hamburger joint in front of his house, in González Catán. She baptized him with an easy-to-remember, unmistakable name: Morfi Burger. The success was immediate. Quick of reflexes, without any knowledge of “business administration” or “economics”, he put together a franchise system. To this day, he never imagined that a borrowed iron would help him fight for customers at a shopping mall, hand in hand, with Mustard and Burger King.

There are currently about 50 young people working at Morfi Burger. Their salaries vary between 60 thousand and 120 thousand pesos

“The rage came in a pandemic: the cell phone exploded with orders”

In 2019 he had five tears. Few players overcome that. “I had arrived with great expectations. He was in good shape physically and had done preseason. But before the start of the tournament I tore myself… Then I recovered and went to the bench. Over time I gained confidence and started playing. I managed to score a couple of goals in the preseason, but an injury affected me again. I was unemployed for a long time, that helped me so that the decision to retire was not so hard”, says Diego.

Finally, Deportivo Laferrere did not renew his contract.

-Was it there that you began to look for alternatives for your life “after football”?

-Yes. At that moment my old man gave me a little iron to make hamburgers. I lived here, behind where the first store is. So, in a pandemic, I received orders. “Well, come on, give me 25 minutes and I’ll prepare it for you and I’ll take it to you,” he told the customers. All very handmade. We had achieved an identity, but we never thought it would be like this. People were taking us… The rage came in the pandemic, the cell phone exploded with orders.

Diego’s hamburger restaurant began on López May Street, in González Catán, and expanded very quickly. Only two years have passed since its creation, and it already has five stores. Four of them are in Dorrego and Laferrere. And the most recent, the one in Catán Shopping, opened a fortnight ago. All, in addition to serving the public right there, do delivery.

-Were you able to secure your future playing football?

-No. One thinks that everyone who plays football earns a lot of money, but that’s not the case. When I went abroad I was able to make a minimal difference, enough to buy a car. It is a difficult job: both in Argentina and abroad, I had to play in clubs where they did not pay me. That’s how difficult it is. 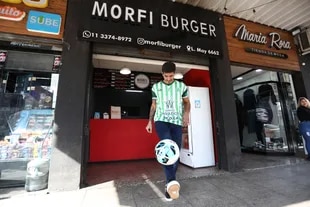 Diego thanks soccer while criticizing the main scourge of the sport’s environment: clubs tend to delay with salaries, both in Argentina and abroad.Gerardo Viercovich

-It must be one of the few jobs in the world in which that inconsistency is repeated: that they do not pay you on time.

-Football is the only job in which they don’t pay you, they owe you. Suppose you play in the ascent, that you win 60 thousand pesos. You have to pay the rent, the electricity, the gas, the children’s school, all the expenses… If they don’t pay you for a month, what do you do? How do you get on the pitch, go on Saturday, perform, win and score three goals?

-How much does a Laferrere player earn today?

-If I tell you, I lie to you, but, when I was [en 2019], earned 12 thousand pesos. It was the minimum wage. It was what Laferrere and all the clubs paid. It was the basic that was raised in Argentine soccer.

Diego Jaime debuted in the first division at the age of 20 in the Portoviejo League, in Ecuador. Precisely on February 10, 2007, against Sociedad Deportiva Aucas. They won 2-0 and he was chosen as the star of the match. He did not score, but he did assist. “Too bad he was alone, he couldn’t celebrate with anyone,” he recalls. Today, with perspective, he recognizes that the loneliness he experienced abroad gave him the tools to maturely resolve the uncertainty that retirement brought him. 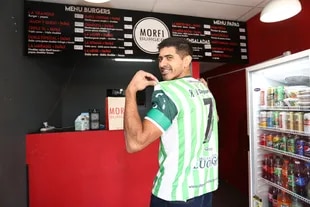 Despite having a strong connection with Deportivo Laferrere, Diego Jaime is highly respected and loved by the fans of the arch rival, Almirante Brown. He also acted in Textil Mandiyú, from Corrientes; clubs from Formosa, Chubut and Santiago del Estero and in the old continent (precisely in Bosnia and Montenegro).Gerardo Viercovich

To the question “Why a hamburger restaurant?”, Diego Jaime gives an interesting answer: “We [él y su esposa] We saw that, in Argentina, people do not have enough to save for big projects, like a house, for example. And that many people spend their money on ‘the taste’. In other words, they work all week to be able to go out and eat a hamburger and have a beer with their friends. So we bet on that.”

Do you consider yourself a person with a talent for business? Did it come naturally to you? Did you take any course?

-Sincerely, no, I did not take any course. I was always guided a lot by intuition, and then I prepared myself. I read books on business, on finance, on a lot of things that one needs. That opens your head. You need to be prepared in case you surround yourself with people who know more. You have to be up to it. 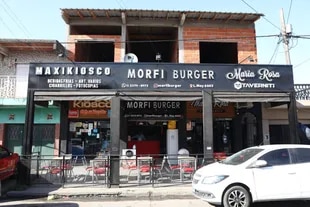 The first place that Morfi Burger opened is located on López May Street at 6662, in González Catán. Although the area is not very busy, customers arrive in groups. Gerardo Viercovich

-It’s very profitable. We have enough public, enough sales. People choose us because it is a good product, at a good price. We use the best, we serve a hearty dish.

-Did you expect that Burger King and Mostaza would go to the mall to compete?

-I expected it, because we are known in the area and we knew that the clients would come to accompany us. Diego, with his father and mother, who own the premises adjacent to the first hamburger restaurant.Gerardo Viercovich

“I talk to clients and ask them questions. I think it’s the best analysis. It’s a way of knowing what we can correct”

Morfi Burger has 50 employees. All of them young students with an average age of 22 years. In addition to performing basic customer service and cooking duties, those who work for him are also involved in coming up with ideas for new menus. “I listen to them all the time,” he says. Most of them receive a salary that ranges between 60 thousand and 120 thousand pesos monthly.

“I prefer to earn less and for people to work happily. I have guys who were the ones who started with me and they are fine, happy, motivated. They improved their quality of life. Now they don’t have to depend on their fathers and mothers. The idea is to make the people who work with us feel valued. Money is important, but I feel that God is giving me so much that I need to give too. How can I not be generous to the people who work with me?” she explains. At González Catán, Jaime is well loved; even by fans of Almirante Brown, Laferrere’s rival.

He no longer misses the life of a soccer player: “I gave soccer everything I could give it, and soccer gave me everything it could give me: beautiful things, ugly things, being alone at 20 years old… These are experiences that they make you mature yes or yes”. From the hand of the lessons he learned abroad (and in the promotion), he knew how to turn that iron into a profitable business that he plans to take to other cities and even abroad.

He closes with a reflection: “Many people are not encouraged. Many people are afraid. But maybe you invest and there is someone who shows up and offers you a hand. It is that: encourage yourself and have a lot of perseverance. And take risks,” she concludes.