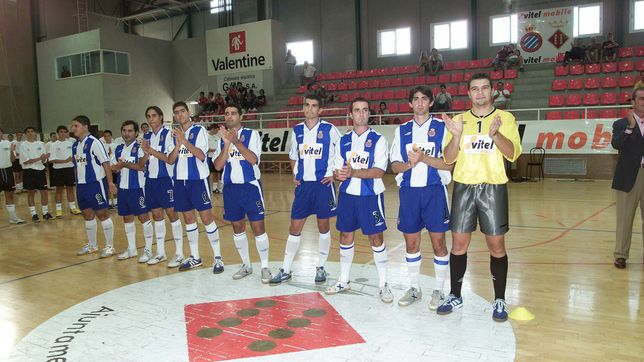 The local classics are perfectly reminiscent of those meetings held at the Miquel Poblet municipal pavilion in Montcada i Reixac. That derby, that

The local classics are perfectly reminiscent of those meetings held at the Miquel Poblet municipal pavilion in Montcada i Reixac. That derby, that friendly against the Catalan team, that promotion to the First Division. Two decades ago Espanyol’s futsal irruption, the 2002-03 season, an ephemeral phenomenon, which disappeared the following year after being on the verge of climbing to the highest category, but which hooked the parakeet fans. And now he is recovering.

This time it will not be the club, focused on 11-a-side football, but the Seccions Deportives Espanyol who, starting this coming year, 2022-23, will have the futsal discipline. Specifically, and as announced this Thursday morning, they will have four senior teams, male and female, of which one male will compete in the Third Division. That is, the fourth category at the state level. A challenge that Álex Astorgas and Christian Roldan will command and that has taken them four years of intense work to materialize. The matches will be played at the Col.legi Jesus and Maria de Sant Gervasi, in a district of Barcelona as deeply rooted in Espanyol as Sarrià.

Futsal will be the fifth discipline that Seccions Deportives Espanyol will deploy since its creation in 2017, as it has previously been successfully developing roller hockey, volleyball, handball and basketball. And recently, last May, its president, Arnau Baqué, met with the CEO of Espanyol, Mao Ye, at a summit in which the foundations were laid for cooperation between two entities that, yes, will continue to be independent .

The Honduran Ascent League returned to football and with many goals
Real Madrid: Two aces up my sleeve
Soccer and coronavirus: the Bundesliga prepares to play without an audience | The advance of the fourth wave in Germany
FOOTBALL 3146