Euroleague: “Fans and players should be penalized as is done in the NBA” 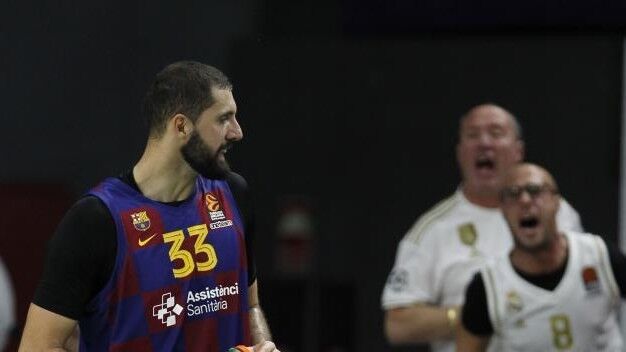 Updated 12/13/2021 - 14:48 LThe NBA, an example for almost everything, should again serve as a mirror for cbehaviors such as those experienced at

LThe NBA, an example for almost everything, should again serve as a mirror for cbehaviors such as those experienced at the Palau last week during the Euroleague Classic. The one of fans and the one of players. Insults from the stands and bad gestures from the court are everywhere, but in the United States they tackle them better than in Europe. There they sanction each other as soon as they exceed and it should be here too.

There are numerous precedents for fans of NBA teams who have been banned from the pavilions for a season or for life. There has been the case of some brainiac who has thrown his drink to some player. In Europe we have not reached that, but it is better to stop it in time before it goes to more. And lThe classics, always hot, are getting hotter and hotter because in recent times the sources of conflict have increased. Nikola Mirotic and Thomas Heurtel, without having done anything other than seeking the best for their careers, have been the center of the wrath of rival fans.

A few days ago, in a game against the Pacers, LeBron James denounced two spectators from the front row who had been told they wanted their son to die in a car accident. They were evicted And they won’t be back at the Gainbridge Fieldhouse for a long time. Had the same been done on Mirotic’s visits to the WiZink Center, when it is called rat, or in that of Heurtel al Palau, when there was taunts about his humiliating abandonment in Istanbul, the two enclosures would have been half empty. The white club, yes, received a sanction for the behavior of its fans.

In those same pavilions and in some other, for years, even the death of rival players has been wished and nothing happened. In fact, the extraordinary atmosphere that existed during the matches was praised. The Euroleague Code of Ethics, implemented in 2019, has done to improve this aspect by appealing to respect for all fans, players, coaches, referees … It is not a question of good humor or of turning basketball into the pear. You can create a great atmosphere for your team and a cauldron for your opponent without the need for insults or slights.

Fines players for their ugly gestures

The heavy hand should also go against the players. Behaviors like Sergio Llull’s at the Palau are equally reprehensible, although he later apologized, something that honors him. It must be hard to hear insults towards you or your family during an entire game, but an exercise in self-control is necessary. And if not, fine. Wizards player Kyle Kuzma was recently suspended with $ 15,000 to make a comb, the same gesture as that of the Real Madrid captain.. LeBron felt the same for hold a basket by putting your hand to your crotch. And Kevin Durant has been fined 25,000 for insult a fan.

After the Classic, Lex Abrines showed his face for Llull. “It’s what happens when you put up with insults for a long time and explode,” he wrote on social media. The Barcelona escort received criticism from their own fans for asking for respect for the players, albeit using the case of a rival. On Sunday night he had to appear on his Twitch channel to argue that that did not make him less of a Barcelona player and that his dream, if the club wants, is to retire as a Barça player. If, in this context of hot games and insults, a player must come out to explain a message of calm, it is that there is much to be done.

Loading...
Newer Post
Barcelona will measure Napoli in the Europa League Preliminary – Football
Older Post
GOLF | Rahm will be in Meaztegi at the closing of the course of his project ‘Golf4Kids’