Everything ready for the boxing function “Back to War”, this Friday 26 – Yucatan Now 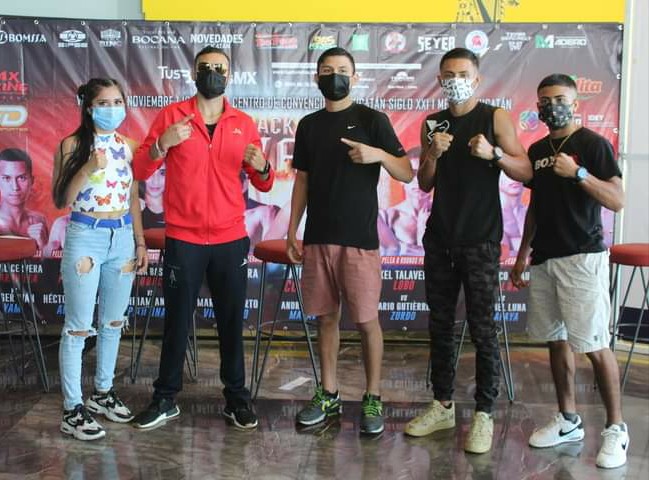 Let the bell ring! The Yucatecan Zaid “Colorado” Rejón and the Guanajuato Andrés “Maravilla” Jiménez met face to face for the first time and de

Let the bell ring! The Yucatecan Zaid “Colorado” Rejón and the Guanajuato Andrés “Maravilla” Jiménez met face to face for the first time and declared themselves ready to exchange shrapnel this Friday 26, in the stellar contest of the boxing function “Back to War”, to be held at the Siglo XXI Convention Center.

Rejón will expose his undefeated quality against Jiménez, in an eight-round fight in the super featherweight division.

“I feel very motivated, I want to go out and demonstrate the work I have done, the victory will stay here in Merida”, predicted the “Colorado”.

“We come to do our job, to give a good fight, I have always been characterized by facing level, strong rivals and this time it will not be the exception, although we have the illusion of winning”, declared, for his part, the “Maravilla ”.

The poster includes the pink gloves, with the darling of the house, Jessica “Tanquecita” Basulto, who will face the capital Miriam “Smurfette” of Anda for six laps, in minimum weight.

On another of the main fronts, Axel Talavera will collide with Mario “Zurdo” Gutiérrez, also in the light fly division, eight rounds; while his brother Hafit will do the same with Mario Victorino, in super bantamweight, six laps away.

“We are excited and excited about this great show, one of the best of the year, we have the prospects with the most future and against category rivals, who are going to put them to the test, it is an evening that promises and will be full of action”, said Mario Abraham Xacur, head of the Max Boxing company.

The presentation was also attended by Santiago Basto Mejía, president of the Mérida Box Commission; as well as Carlos Sáenz Castillo, director of the Sports Institute of the entity (IDEY).

Marilyn knocked out violence and became boxing champion
Boxing in Piura: Young Catacan asks for support to open seedbed and discover new talents
BOXING | Kerman: “Flatley is a warrior, but we are prepared for anything”
BOXING 970