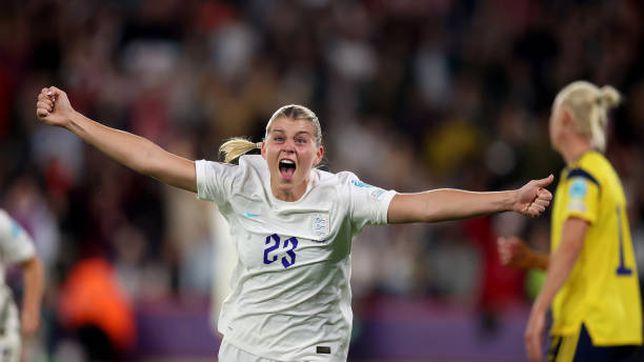 Exhibition, recital, a real show, new proof that women's football is a show worthy of admiration. England pulled out all the stops to thrash a fra

Exhibition, recital, a real show, new proof that women’s football is a show worthy of admiration. England pulled out all the stops to thrash a fragile Sweden and reach their third European Championship final. Beth Mead, with her sixth goal, a competition record, Bronze, Russo, with a historic backheel, and Kirby scored for the team coached by Sarina Wiegman. Wembley awaits (Sunday, 6:00 p.m.).

The match began dominated by a Sweden with clear ideas that gave up the ball in midfield to base their attacks on quick transitions that left Blackstenius practically alone against Earps. It was precisely the Arsenal striker who was the first to give a serious warning to England in the 9th minute. She won the match against Bronze and tested the opposing goalkeeper with an excellent cross shot. Gerhardsson’s plan worked perfectly. With Wiegman’s still unhappy, a corner taken by Asllani was finished off to the woodwork, of course, by Blackstenius. They could give him a stone that would finish him off just the same.

England shook their nerves and relaxed their legs to build their game and Hemp, Kirby and Stanway began to step on the edge of the rival area to lead the host’s reaction, who did not want to see themselves, as in the quarterfinals, below on the scoreboard .

Then Beth Mead appeared, who in this European Championship seems to be touched by a magic wand. The British ‘7’ stayed inside the area to wait for a second play after a clearance by Sweden. The ball was picked up by Bronze who, with his glove for his foot, put the ball back in the dangerous zone: Mead controlled it and crossed it at half turn to make it 1-0. The joy exploded in Bramall Lane (34 ‘).

Lindhal, from the goal, shouted to his team, their fifth final could not escape them. But Sweden was knocked out and going through changing rooms did not wake them up. England pressed and their fans celebrated the first corner in favor of the second half as goals are celebrated. Minute 48. Exchange of roles. Mead crossed and Bronze, from the heart of the area, finished off a dive to put the second of Wiegman’s on the scoreboard. Tranquility for the English.

Seger, an entrance without prize

It was Gerhardsson’s turn to make a move and he was veteran. Captain Seger, recovered from her injury, entered the field to make sense of Sweden’s attacks. Defense of three and play. Asllani, more liberated, began to make her presence known in the three-quarter zone. Blackstenius, with his knee, again forced Earps to work hard to prevent the Swedish goal. Minutes before Hemp had crashed a shot on the crossbar on one of those occasions that, when you miss them, do not let you sleep at night.

The exchange of blows ended up being resolved with an anthological target. Alessia Russo missed in front of goal after Kirby’s death pass, but she recovered and beat Lindahl with a historic backheel that went under the legs of the Swedish goalkeeper. The stopwatch marked 68 ‘and England walked towards its third final of the European Championship.

There was time for Kirby, always sensational, to make the fourth with a bounced shot from the edge of the area. England only suffered 15 minutes. He endured, took out his football and crushed a Sweden that made waters in defense. The hostess will be at a Wembley until the flag on Sunday. His first European crown awaits him.

ARGENTINE FOOTBALL: AFTER A LONG TIME, THERE WERE NO VISITORS VICTORIES
Jorge Barraza: 2022: The football we will have | Columnists | sports
L’Equipe: Madrid ‘forced’ PSG to pay 40 million for Nuno Mendes
FOOTBALL 3177

Loading...
Newer Post
Fontecchio pays his clause and goes to the NBA
Older Post
Cazoo Baskonia confirms Fontecchio’s departure to the NBA. This is how they communicated