Exhibition worthy of Champions in the fight against ALS. 91,062 spectators witnessed the clash at the Camp Nou, Bernardo Silva, a great attraction. Summary and goals of Barcelona 3 – Manchester City 3; friendly match for the ELA 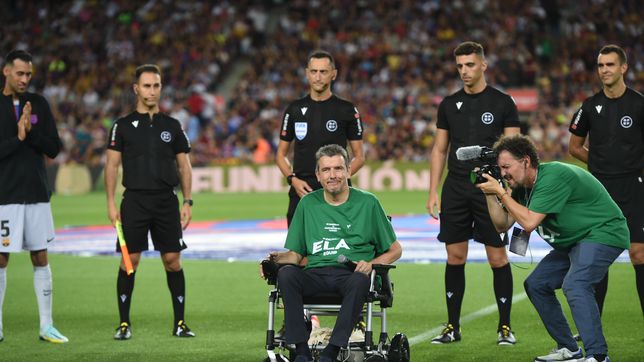 Barcelona and Manchester City offered the best of their gifts to the cause. Rain of goals in this charity match in the fight against ALS where the

Barcelona and Manchester City offered the best of their gifts to the cause. Rain of goals in this charity match in the fight against ALS where the best result has been the 91,062 viewers who have attended to witness it at the Camp Nou. The proceeds will go to the investigation of this disease, suffered among many others by Juan Carlos Unzue. The former player and coach of Barcelona was the protagonist of the evening, doing the honorary kick-off and dedicating a few words to those present. And previously to the blaugrana dressing room before going out to the field.

In the football field, and as expected in this type of match, attacking football prevailed more than normal. With the league last and the following weekend, rotations were expected from both teams and so it was: Xavi came out with Pique-Kounde behind (yet to debut in domestic competition) and with aubameyang on point. He put the Gabonese 1-1 after Julián Álvarez’s opening goal and left in the second half with a smile to the fans in the change. To know if it will be his last game.

Coincidentally, the other two goals were scored by two others who have more than one leg out of the club: De Jong made it 1-2Palmer responded after two minutes and Memphis scored 2-3 that seemed final. Mbete in the final stretch gave the scare with a clash against Christensen and had to retire on a stretcher, the game being stopped for more than ten minutes. in the discount Haaland forced a very rigorous penalty and Mahrez converted itthus closing this exhibition against the fight against ALS.

These 8 teams will fight for the Beach Soccer crown
Real Madrid: Who can replace Casemiro?
Charlyn Corral, top scorer at club level in 2022
FOOTBALL 3750

Loading...
Newer Post
These are the 5 Mexican boxers with the most titles in history
Older Post
Belgian GP F1 2022: Max Verstappen threatens the rest of F1 by returning to Spa: “It’s my favorite circuit”