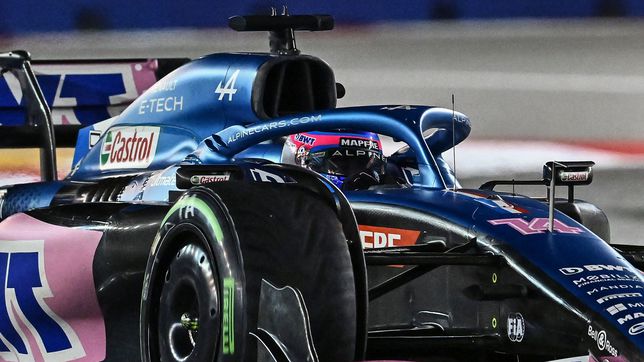 Alonso led during Q3, took risks with the Alpine because the track was inviting and finally achieved a positive fifth place on the grid, because it

Alonso led during Q3, took risks with the Alpine because the track was inviting and finally achieved a positive fifth place on the grid, because it is difficult to overtake in Singapore and he will be able to defend himself in a dry race. The Spaniard spoke to the media after Q3: “Did I touch the wall? I do not know. It was stressful, without a doubt, although borderline fun because the level of risk and stress was very high. It was brave of everyone to put on dry tires at the end, but it turned out to be the right decision in the end. Going faster and faster with each passing lap and going into the corners hoping the car doesn’t go off the track, trusting the track will be drier than it was a minute and a half ago, the last time you drove by, always involves a lot of stress. I hope that in the race it will be a little calmer”.

On the expectations for the race: “If it is dry it will be difficult to overtake, it would be good to secure the top-5 and score more points than McLaren, the main objective. If it’s wet a lot can happen. It can be a very good race for us and you can crash and retire. There aren’t many positions between us and the podium so why not dream big tonight.”

“I have always been fast in Singapore”

What is clear is that Marina Bay is one of those circuits where he has a few extra tenths. “I like the dark, and being away from Europe,” she joked. On excessive risks: “I’m not fighting for the World Cup, it wouldn’t be good for my heart to take so many risks without a big reward. I do it, I always take the same risk even if I’m 20th. But this time it was above other rankings this year. It takes a lot of courage in Singapore, we came from Monza with six corners and here it’s 23. You have to be smart with the tires and you need confidence on a street circuit. I have always been fast in Singapore, for some reason; It also happens to me in Australia, Melbourne is one of those circuits. But I’m not that fast at Spa, so I still have things to learn after 20 years in F1.

As for the evolutions of Alpine this weekend, they contribute but do not decide: “We took a step forward and I’m happy, but we need to go to Suzuka to really assess the package, because in Singapore the track evolves with every lap. Between Monza and Singapore it is very difficult to judge the car. We are more competitive because of the improvement, but it is a tenth or two. When we are seven tenths ahead of Norris to five of Sainz, I could take the car from Bahrain and I would still be in the same position.

Loading...
Newer Post
Patricio Pitbull asks for a fight with Aldo in MMA or boxing
Older Post
Arsenal vs Independiente, by the Professional Football League: schedule, TV and formations