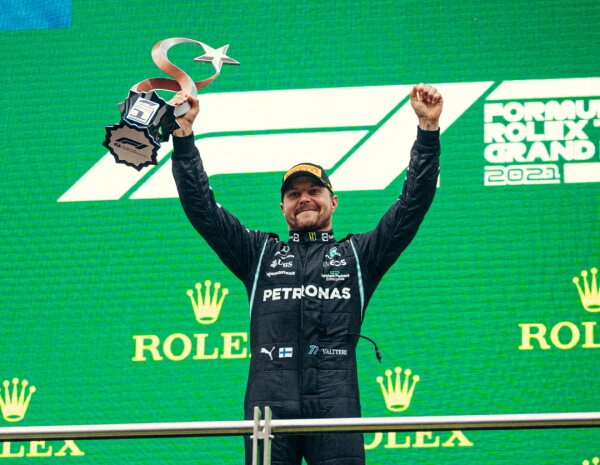 The F1 team al Día offers its opinion after the race of the Grand Prix of Turkey last weekend. The category landed in Istanbul and many of us had

The F1 team al Día offers its opinion after the race of the Grand Prix of Turkey last weekend. The category landed in Istanbul and many of us had the predisposition to see an interesting weekend, it is not for less because the race back to Turkish lands last year due to the health emergency conditions imposed due to the pandemic, that race left us shocked and with a good taste in the mouth. With this panorama, these days ago we arrived at Istanbul Park, a track that played tricks on more than one in 2020, but that had been treated to improve its performance for this year. In addition, another element that did not want to miss the race was the rain, on Friday it did not appear, but from Saturday the story was totally different. A dry race was expected on Sunday, but plans changed and we had one of the most unusual tire races in recent years before us.

The race started with action at the front, it is true that Bottas and Verstappen concentrated on putting their feet in dust in the first few meters, the Finn’s reaction was obvious, he just did what he had to. Under different conditions we would not have been surprised to see Verstappen trying to smash 77, even in these conditions, but his great rival was far behind and in the middle of the storm, so it was clear that his mind was set. in the championship.

What was not very clear to me were the decisions of the race direction, the sandwich to Pierre Gasly ended in punishment for Fernando Alonso when he spun without any other remedy after the Apha Tauri touch that he had nowhere to go. The Frenchman was also punished, understandable, but we have seen actions of these and tougher at the start in which no one was punished for race direction. We always hear that no one is punished for the consequences, but for the act itself, so I do not understand what happened in Turkey, with this I do not blame or exonerate anyone on the track, but things must be better analyzed and a stable pattern of sanctioning , not a random circus.

We saw the memorable comeback of Carlos Sainz and to a lesser extent that of Lewis Hamilton, the British did not have it easy with the strategy and on his balance he had two options, one with a greater reward and risk and another more secure, but we cannot say no They are giving everything for the title, everything is at very high levels and the tension is a reality, what we saw in this garage we also saw at other times in Max’s garage. Undoubtedly, one of the most explosive battles in recent years and one that we will see its outcome sooner rather than later.

This season we have mercilessly whipped Valtteri Bottas on, okay he’s in Mercedes, okay more is expected from someone who is in his seat, okay he has Hamilton next to him, the stage is what it is and the driver is the one it is. You can judge, but sometimes we forget that the one under the helmet is a person. This year it took 16 races to be able to hear his anthem, but if we hit it sometimes, we also have to recognize when things are done well. On Saturday he inherited the pole from his teammate, but he made a very good qualifying and on Sunday he perfectly controlled the situation, not a single weakness and good points for the team. I don’t know if it will be one more victory for him or maybe the last one, but he wanted to demonstrate and in Turkey he did, he is a good pilot, he may not be up to the standards of others, but it is not a reason to stone him out of habit and not recognize when it does well.

Others who played it were Leclerc, who tried to dream of something big, but it could not be, but the possibility of having dreamed is already a step compared to what they had before. And also Esteban Ocon, he endured without changing wheels and played the guy for a point, you just had to see his wheels when he finished.

Cristian Rodríguez: “I expected something more, but I am satisfied”

The Turkish Grand Prix promised strong emotions, and in a way it delivered. Although it was not up to the test of 2020, for me without a doubt one of the best of its season, it left us a show on the track. Mercedes surprised with a change of the combustion engine in Lewis Hamilton’s car, which pushed the Briton ten places back on Sunday’s starting grid. He was the seven-time champion in Qualy with the best time, but I have to say that I expected more from him in the race. He had a car far superior to the rest and the podium was the least he had to reap. However, he ran into an aggressive Sergio Pérez, who I will talk about later. In the rival garage, Max Verstappen not only minimized damage, but also regained the leadership of the World Championship after climbing to the second step of the podium, which was the maximum he could aspire to. I had faith in Red Bull this weekend and it disappointed me when it came to the performance of the RB16B. Luckily, its drivers knew how to keep up and avoided the lack of rhythm of their car. I hope this is a thing of this race and not repeated in the next dates, or else the men of Brackley will return to be favorites in everything.

But let’s go now with the “secondary” of the respective teams, who this Sunday finally acquired the leading role and had the impact on the test that we all expected from them. Very good Valtteri Bottas, solid, constant and fast to take his first victory of the year. That it was about time, by the way. The Finn has been made to beg, who little more and leaves Mercedes in white. Well, they say better late than never. If he helps his teammate to the title, at least his disastrous campaign will have served a purpose. For his part, Checo made a masterful defense to put up with Hamilton and subtract points that could be crucial in the future of the title. Well also the Mexican, who chased away the ghosts of the last races a bit and gave us one of his best versions of the year. Hopefully it continues like this until the end of the season.

From behind, highlight the great performance of Ferrari. The new power units seem to be working both on Charles Leclerc’s car, really competitive over the weekend, and on Carlos Sainz’s, superb on his comeback. The title of Driver of the Day was well deserved. A pity that those in red failed again at the pit stop. I hope they get on with it, because they have already made the Spaniard lose some important points. Fortunately, and despite the handicap of this GP, he continues ahead of his garage companion in the general classification. Less emotion gave me a McLaren at half throttle. I didn’t like this decaf Lando Norris, but I trust it will revert to its usual Austin self, just like Ricciardo, completely gone. I don’t want to end without mentioning Alonso, unlucky at the start and erratic in his recovery attempt. He is also human, nothing happens. Will come back again in the next test.

Martín Yuguero: “There were exciting moments, but far from what was seen in 2020”

The bar was quite high after the show we witnessed last year in Istanbul, the rain and the resurfacing of the track had been two key factors throughout that weekend. At this season’s event there weren’t so many consistent surprises, but there were some exciting moments from the first lap. There were many fronts to pay special attention to such as the fight for victory between Bottas and Verstappen, the possible battle between Leclerc, Gasly and Alonso in the Top 5 and also the two that received penalties for changing components of the power unit, Hamilton and Sainz.

Once the traffic lights went out, Gasly was sandwiched between Pérez and Alonso, so the Frenchman did not have the necessary space to avoid hitting the Alpine driver at the exit of the first corner. Faced with this event, the commissioners had no doubts and penalized Pierre. Although he had to comply with this order, it was a new controversial decision on the part of those who put the penalties, it is true that that touch ruined the Spanish’s career, but normally it is usually permissive in the first round and more taking into account the circumstances, this time it has not been the case.

From that moment on, the race was interesting, especially on the side of Hamilton and Sainz as they were forced to climb from eleventh and penultimate places. Not only did they put on a show, but Yuki Tsunoda also did it by defending himself against the attacks of the seven-time world champion from lap two to lap eight with exceptional driving. His goal was to hold the Mercedes for 20 laps, in the end it was not what he wanted, but he was brilliant in not having made any slightest mistakes, despite the enormous pressure he had to endure. Later, the next obstacle for the Briton was Sergio Pérez, the fight between the two was spectacular, they were in parallel, but the winner was the Red Bull driver. Thanks to this defense, Verstappen managed to get out of the pits ahead of them and it was decisive for the Dutchman to finish second.

In the end, Bottas found himself victorious after failing to do so in so long, the last time at last year’s Russian GP. This first position is positive for him for being one of the last joys as a representative of Mercedes and also for finishing ahead of Max Verstappen. As in the case of Valtteri, Pérez was able to regain his position on the grid, he fought hard against Hamilton and also returned to the podium after several irregular races. Although this appointment was not as shocking as the one in 2020, it is true that there were some spectacular fights, we look forward to more for the next GP in Austin.