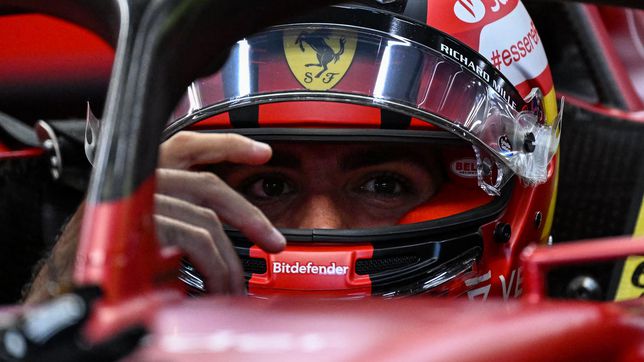 Carlos Sainz starts fourth after fighting for pole at Marina Bay, but staying just over a tenth off Leclerc's time, and with two rivals between the

Carlos Sainz starts fourth after fighting for pole at Marina Bay, but staying just over a tenth off Leclerc’s time, and with two rivals between them, Pérez and Hamilton. The man from Madrid explained himself after qualifying: “It wasn’t easy to go for the dry tyres, but you had to go for it as the track dried up, you had to take risks without making mistakes and build the lap little by little until the last lap. . I went for it, but possibly one lap too soon; because I realized that I could have done one more lap and thus maximize the evolution of the track. It was a clean lap until the last sector and I’m a tenth and a half off pole, so it hurts a bit.

“I kept the pace high so as not to lose temperature with the wheels, but I would have preferred to do the lap later because that would have given me a couple of tenths,” says Sainz, who assesses the asphalt conditions in Singapore: “The old surface was dry and the new one, wet. In every corner there was a condition and that puts the driver’s skills to the test. I was on pole until turn 16, but then I had a scare and lost it. It is what it is, I will try to recover in the race”. For the race, he has to come back: “It’s very difficult to overtake, but I hope it’s possible”.

Red Bull did exceed the budget ceiling of Formula 1 in 2021
Formula 1. Why drivers don’t wear the number 13
Formula 1 honored Fernando Alonso for his record 350 races
FORMULA 1 3013

Loading...
Newer Post
Russell and the “strange” problem that prevented him from going to Q3
Older Post
Singapore F1 GP 2022: Checo Prez: “The start will be crucial, we can’t make mistakes”