F1 | Carlos Sainz: “Verstappen has made mistakes and has won anyway” 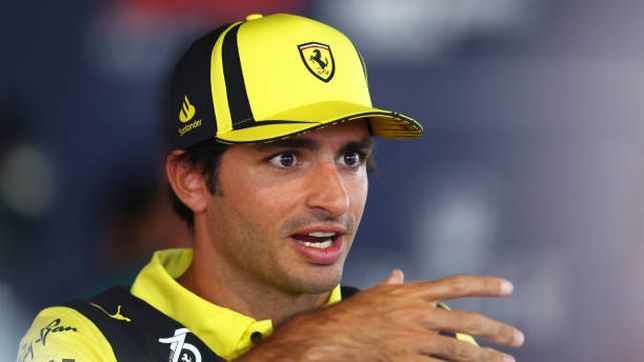 Monza will be like Spa, with a pile of drivers sanctioned for changing the engine. Among them, Hamilton is already confirmed, but there will be mo

Monza will be like Spa, with a pile of drivers sanctioned for changing the engine. Among them, Hamilton is already confirmed, but there will be more (some repeat and there will be surprises). One of them will be Carlos Sainz, who will thus be able to have the hybrid improvements of Ferrari and arrive short of mileage in the final phase of the World Cup. The season for the man from Madrid is complex: in the first races he lacked confidence; but since he took full control of the F1-75, reliability, strategy, pit stops or simply the car’s competitiveness have failed. He is fifth in the World Cup and the objective now is to increase the number of victories.

Although for now, this weekend it’s time to put on the suit of comebacks (in France he recovered from 19th to 5th). “If we decide to change the engine, I hope that a lot of people will change it, like at Spa, and that will allow you to start 15th or 16th, like Max and Charles at Spa. We will see if that is the case,” said a cryptic Sainz. In any case, it is a fact that he will release a power unit. This time it’s up to Leclerc to aspire to pole position and fight for a victory that he already achieved in 2019.

Here Verstappen and Checo scares you because this year Red Bull counts the visits to the two low-downforce grand prix par excellence, Azerbaijan and Belgium, by doubles. The question is, at what level will Ferrari perform after three rather poor races? “After a couple of days of analysis, we have a lot of data. In the race we have not been as strong as we would like. If it comes because the tires overheat, because the rivals are better due to their evolutions, or because we have not optimized the ‘set-up’, it is something that we are going to investigate to try to improve,” says Sainz, who in Zandvoort “had damage from the contact with Lewis and that affected the pace, although the general problem is bigger than that.

“Red Bull has been very reliable”

Part of the general problem is perhaps the superiority of Verstappen (109 points ahead of Pérez and Leclerc), winner of ten races in 2022. Sainz tells AS how he sees the ‘Supermax’ season: “He is having a very strong season. He has made very few mistakes and when he has, like in Spain, where he spun in the same place as me, or in Hungary, he has recovered and won anyway. That’s the biggest difference, even on days when he has had a bad time he has been able to win. Red Bull has been very reliable from the first few races and Max’s season is incredible, he is doing a particularly good job. So he deserves it.”

Ferrari celebrates the manufacturer’s 75-year history at home with touches of the original ‘Modena yellow’ on the car’s bodywork (it completely dyes the clothing and suits of the two drivers). The color yellow brings bad luck on stage, they say, but there is no room for superstition in Maranello, at this point in the course everyone tends to be where they deserve. The drivers’ and constructors’ titles will go to Verstappen and Red Bull, but a victory for Ferrari on Italian soil would excuse any previous mistakes, it would be the best of lifesavers. And of that, in the garage, they are all very aware.

The tire change that will revolutionize everything in F1
Unusual: Formula 1 made a historic change at the Spa-Francorchamps circuit
Formula 1: This is how the F1 Drivers’ Championship goes in 2022
FORMULA 1 2359

Loading...
Newer Post
Queen Elizabeth II and her relationship with football: Arsenal, West Ham and her love for the English Lions
Older Post
The NFL begins: the 10 players who earn the most money in the highest paid league in the United States