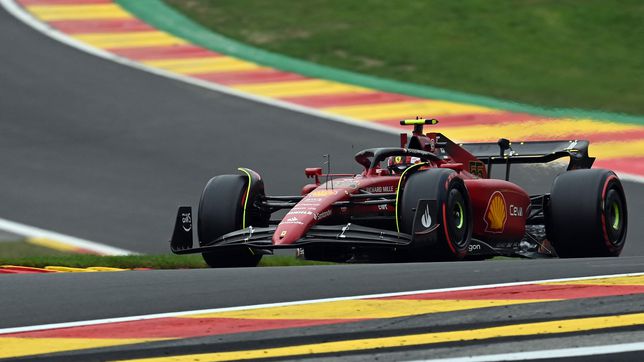 Verstappen flew, even if he was suspended, and was the fastest in the standings, but... in addition to being fast, you have to be generous: the Dut

Verstappen flew, even if he was suspended, and was the fastest in the standings, but… in addition to being fast, you have to be generous: the Dutchman swept six tenths over the next and even then had no time to give his team a slipstream. teammate as the other penalized drivers did. The moral is fair: Sainz will start from pole in the Belgian GP after a first great lap in Q3, but not the second, seasoned with two slipstreams by Leclerc well used. Fellowship, this time yes, in the Ferrari garage. In both directions (Carlos helped him in Q2). And a privileged starting position for the F1-75 in a circuit that until now has been elusive due to temperature (cold) and top speed (good for Red Bull). In his wake Sergio Pérez leaves, through the dirty area and more alone than ever, seen what has been seen, but with a car that can be ventilated to the Ferrari in a few curves.

Carlos beat Checo, his only direct rival this Saturday, by a slim margin of almost two tenths. The Mexican did not have that extra help from the other side of the garage, and that in the decisive moments of the last round Max had already got out of the car. How curious. Perhaps it doesn’t matter, with that sky-high pace and a brand new engine it’s logical that Verstappen will climb to the top and fight for victory, no doubt. But from the outset, the lead of the pack will be occupied by a Ferrari that will not think of slowing down to wait for him. Probably what would have happened with Pérez at the helm.

Alonso put the icing on the cake in another of those impeccable Saturdays for his part with the Alpine. Fernando was sixth in the time table but once the punished are eliminated he rises to third position, the clean zone of the second row. This is the best Spanish grid in the history of Formula 1, a first and third place that surpasses the second and third in Canada. In Montreal, the Spaniard had a cross in all the incidents of the race and finished very far from the podium, but this Sunday he aspires to stand up to the two Mercedes. From the outset, he beat both Hamilton and Russell on the final lap and with some confidence. A tenth over the best ‘poleman’ in history and almost half a second over young George.

The silver arrows faded at Spa just when the opposite was expected, especially with that directive against porpoising applied from this weekend and that they had pursued so much since Brackley. Ironies of fate, in the race that offered the most chances of victory, with so many ‘roosters’ from the bottom of the grid (Verstappen starts 15th and Leclerc, 16th), the best options fall initially on Sainz, Pérez and Alonso… until the champion comes back.

Frank Williams, the great patriarch of F1, passes away
The 6 Mexican drivers who have raced in Formula 1
Azerbaijan GP F1 2022: Toto Wolf, upset about being third in the constructors’ championship: “It is not acceptable for Mercedes”
FORMULA 1 2355