F1: Ferrari achieved 1-2 with Leclerc and Sainz in Bahrain 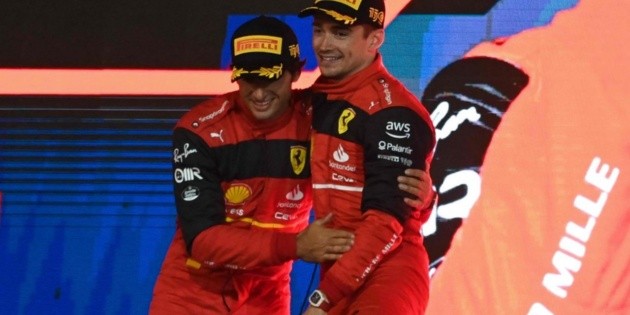 What a way to release the regulations of the F1 for the team ferrari! Charles Leclerc and Carlos Sainz they made it 1-2 in Bahrain

F1: Ferrari achieved 1-2 with Leclerc and Sainz in Bahrain

What a way to release the regulations of the F1 for the team ferrari! Charles Leclerc and Carlos Sainz they made it 1-2 in Bahrain thanks to the excellent car with a repowered engine that the team made available to them for 2022.

Leclerc took pole on Saturday, with Sainz just 7 thousandths away from overtaking the Verstappen’s Red Bull, the Dutchman ended up sharing the front row with the Monegasque. No one could have predicted that the scarlet cars would finish first and second in the race, the 2017 Monaco Grand Prix having been the last occasion, with Vettel and Raikkonen at the wheel.

Leclerc took the lead from the start, containing the onslaught of Verstappen. sainz closed the internal path to Perezremaining third, causing the Mexican to lose two positions to Hamilton and Magnussen.

“Czech” regained fifth position at the end of the main straight on lap three, Magnussen He fell to sixth place after over braking.

Hamilton tried to catch up to sainz but the Spanish increased the pace and separated from the seven-time champion. Perez overtook the Briton on lap 9 to regain fourth place, the driver from Mercedes entered the pits on the hard compound returning in 12th position.

Leclerc increased his advantage over Verstappenthe Dutchman attempted the cut on lap 15 wearing soft shoes, sainz followed him to the pits, with Leclerc one turn later opting for the same compound. Perez he changed to strategy B and put intermediates with which he established the fastest lap a few laps later.

Leclerc returned to the track just in front of Verstappenthe Dutchman overtook him taking advantage of DRS on the main straight at the start of lap 17, Leclerc he regained position at turn four. Verstappen repeated the overtaking one turn later, Leclerc he regained the lead in the same corner. A third attempt by the champion allowed him to snatch the lead again from Leclerc but he went too far on the brakes and had to definitively give up first place to the Monegasque, who gradually moved away with a higher pace.

Verstappen tried a new cut stopping for intermediates on lap 31, Leclerc following him a lap later on the same compound, returning to the track with a bigger lead, the Dutchman complained about his team’s recommendation to take care of the new set of tires on his out lap, thus preventing him from overtaking his rival.

sainz took the race lead for three laps, closely followed by Perez. The Spaniard entered for a medium compound while the Mexican changed too soon for a set of used softs, the intermediate ones were undoubtedly the ones that provided the best performance to the Guadalajara.

Verstappen stopped for the third time on lap 44 followed by sainz, hamilton and Perez a lap later, everyone was on the soft compound. Leclerc stayed on the track. Pierre Gasley He was in eighth place ahead of Sebastián Ocón on lap 46, when he stopped at the side of the track with the engine of his Alpha Tauri on fire. The safety car took to the track, Leclerc took advantage of it and went in for another set of softs, returning to the race in first place.

The race resumed on lap 51 of 57, Verstappen reported stiffening in the steering of his RB18, his team told him there was nothing to worry about. Leclerc made an excellent second snatch separating from Verstappen who began to be threatened by sainzthe champion reported a problem of lack of power, Sainz, Perez and Hamilton they overtook him, the Dutchman headed inevitably to the pits to withdraw from the competition.

Hamilton approached Pérez’s wing, the man from Guadalajara reported a similar problem in the power plant, his lack of speed was evident, he maintained third position as best he could until at the beginning of the last lap, the engine of his car was tied to the end of the straight, locking the rear tires and causing a spin that took him out of the competition. Three of the four participating engines inherited from Honda by the organization Red Bull they had succumbed.

Leclerc He crossed the finish line victorious followed by his teammate Sainz to the roar of the audience, the team’s staff and the millions of tifosi around the world. Ferrari, the most important and legendary team in F1 is back, with a level of performance that suggests the end of the Mercedes era.

Hamilton and Russell moved up to third and fourth place respectively thanks to the misfortune of the Red Bull team who looked like the enemy to beat in the previous tests. The Germans are far from the pace of the leaders but they learned a lot from this first race.

Kevin Magnussen he made a dream return to the top flight by being called up to replace Nikita Mazepin two weeks before the start of the season. The Dane showed his speed and took the Haas, the worst car of the previous season that did not score any points, to fifth place, taking 10 points with the surprising result.

Valtteri Bottas he closed the race in a solid 6th place, where he had started, after falling to 14th position on the first lap, aboard the Alfa Romeo. sebastian ocon he recovered from a five-second penalty for touching Schumacher to finish seventh aboard the Alpine. yuki tsunoda He repeated his good debut from last year by driving his Alpha Tauri to eighth place.

Tags: Motoring, Ferrari, Formula 1
F1: Ferrari will present massive improvements at the Spanish GP
F1 2022: How is the fight for the title of drivers and teams going?
This is how the constructors classification goes after the Austrian GP
FORMULA 1 3014