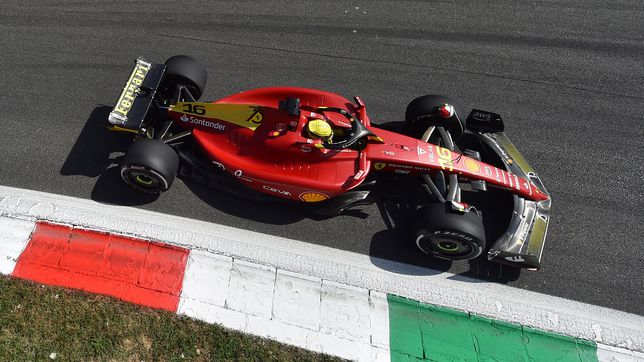 From the outset, Ferrari leaves for Friday. Leclerc led the first free practice of the Italian GP followed by Sainz, both in the same tenth. The

From the outset, Ferrari leaves for Friday. Leclerc led the first free practice of the Italian GP followed by Sainz, both in the same tenth. The F1-75 lands well in Monza, although it is already known that this is not how it begins, but how it ends, and everyone assumes that the Red Bull of Spa and Zandvoort will be very strong this weekend. Russell and Hamilton were two and four tenths behind, respectively; of the two Ferraris and the fifth time of the morning was signed by Verstappen, also below half a second. After the Dutchman, the two Alpines separated by 14 thousandths (Ocon, 6th; Alonso, 7th).

In any case, as happened in Spa, the protagonists now are the penalties on the grid, because there are engine changes. Verstappen will release only the engine, so there are five places. This is also how the steamroller of recent races is understood a little better: if the combustion engine lasts two grand prix, it can be squeezed, of course. For now, ten places for Pérez, 15 (engine) + 10 (gearbox) for Sainz; 15 for Bottas and bottom of the grid for Tsunoda and Hamilton.

The entire Formula 1 kept a minute of silence in the ‘pit-lane’ for the death of Elizabeth II, Queen of Great Britain, ten minutes before the start of training. Seven of the teams operate from England, although they compete under the flag of another country. They are Mercedes, Red Bull, McLaren, Alpine, Aston Martin, Williams and Haas. Another minute’s silence is expected before the race, on the Monza grid, this Sunday.

How many podiums does Carlos Sainz have in Formula 1? The complete palmares of Spanish
Italian Grand Prix, the next stop for F1
F1 race in Bahrain: results, summary and reactions of Alonso and Sainz in Sakhir
FORMULA 1 2422

Loading...
Newer Post
Three places for the Mallorca Golf Open
Older Post
NFL: Allen gives a recital and the Bills crush the Rams at the start of the NFL