F1 | Free Practice 1 in Hungary: Sainz warns at the Hungaroring 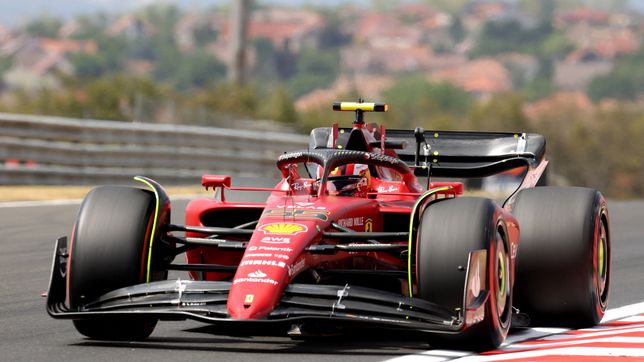 Carlos Sainz is at his best moment of the season. Sensations dictate it, results say it: since Monaco, he has been second or first in all the race

Carlos Sainz is at his best moment of the season. Sensations dictate it, results say it: since Monaco, he has been second or first in all the races he has finished with the exception of France, when he had to come back from 19th position on the grid due to the engine change, and even so it was fifth. The man from Madrid continues in Hungary right where he left off in Paul Ricard and leads the first free practice session at the Hungaroring ahead of Verstappen (0.130) and Leclerc (0.289). Max lowered Charles’ best time at the last minute, but Carlos was able to beat Red Bull’s times when he was on the soft rubber.

Here the pace over one lap is essential because the circuit offers few overtaking opportunities, and none that are clear. For this reason, although on paper it benefits Ferrari, Red Bull can give them a scare this Saturday if they are not able to sign a pole position. At the moment, it is unlikely that any other car will appear in that first row, because the two Mercedes were more than eight tenths from the head. Difficult for Hamilton to break the winless streak here, as he did in 2009 with a McLaren worse than this Mercedes.

Otherwise, Alpine is where expected, inside the top-10 but behind McLaren. Alonso, who turns 41 this Friday, was tenth just behind Ocon. The two cars from Woking settle into theoretical Q3 and Norris seems capable of beating the Mercedes at times. Meanwhile, on a technical level, the biggest novelty is signed by Haas with a Ferrari-inspired single-seater, but white instead of red. We will have to wait until Sunday to confirm if the Maranello recipe has worked at the home of Mick Schumacher and Magnussen.

F1 2022: Italy, a series of ups and downs for Checo Prez
Leclerc and Ferrari cannot afford any more mistakes on a circuit dominated by Red Bull
“It was very painful”: the reason that pushed Sebastian Vettel to withdraw from F1
FORMULA 1 1980

Loading...
Newer Post
Neighbors of the Alicante golf course ask that the irrigation flow be recovered to avoid odors
Older Post
Evander Holyfield is bankrupt and refuses to sell this luxurious car