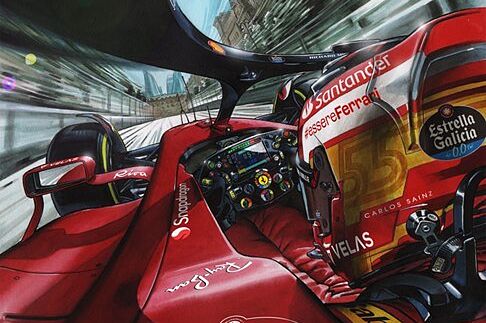 The eighth date of the season begins, the Azerbaijan Grand Prix, Usually very fast appointment, crazy on Sundays and without a clear prognosis except that in the long finish line of 2 kms the duel between Red Bull and Ferrari should be settled.

Carlos Sainz still regrets the missed opportunity in Monaco. “Of course on my side of the garage there was little to improve there, because I found myself leading the race before switching to sliks, we did a good strategy and the details, Latifi two sectors ahead of me… in F1 you have to have everything on your side, the details, everything has to click, I drove well, it just took a hair of luck. Maybe I stop a lap earlier and I don’t take advantage of Checo, I do it one lap later and he makes me ‘undercut’, you can never know, it’s not easy,” Carlos assured.

Alonso, for his part, debuts entries in the car’s radiators, two new ones shorter to gain speed on the long straight, but he trusts the crazy circuit itself more than his A522. “I think we were more competitive at the start of the season, the top three teams are a bit far behind, Red Bull, Ferrari and Mercedes, and I think that we are not making merits to fight for the podium, I think that the 7th in the first place for which we can fight, but we’ll see because Baku is unique, it’s street, everything happens on Sundays and we’ll focus on Sunday, we want action, with a car with little charge, no room for mistakes, let’s see”.

Tags: Ferrari, gp-azerbaijan-f1, Formula 1
INFOGRAPHIC: This will be the spectacular 2022 Formula 1 season
From Real Madrid to Formula 1: who is the person behind the image of Carlos Sainz
Fernando Alonso, Ferrari and an unexpected bomb that shakes Formula 1
FORMULA 1 1543