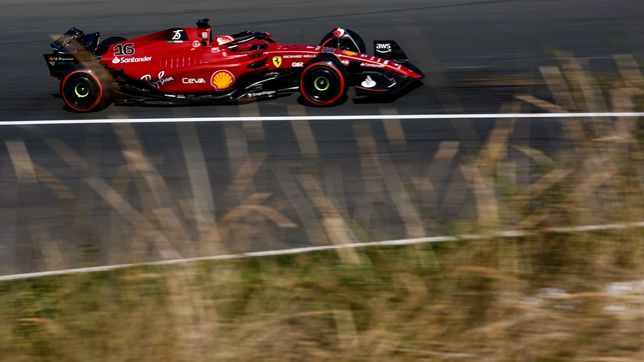 Charles Leclerc led the last free practice of the Dutch GP with 66 thousandths of an advantage over George Russell. Ferrari-Mercedes equality, but

Charles Leclerc led the last free practice of the Dutch GP with 66 thousandths of an advantage over George Russell. Ferrari-Mercedes equality, but also Red Bull: Verstappen finished tenth and a half behind the F1-75. Sainz (4th), Hamilton (5th) and Pérez (6th) will also appear in that fight in qualifying (3:00 p.m. CET). One of the most technical and narrow circuits of the season may lead to the first three-way battle, or six, for a pole that is worth more: in the race it will be very difficult to overtake. Although the DRS area has been lengthened.

There were no incidents in a session dedicated to the short runs, the qualifying trials. The RB18 surprised me first, toned down after a fateful Friday for Max (the gearbox broke in the morning and it only rolled in the afternoon). But everything is already in place and Verstappen is ahead. This is what the 105,000 fans who will pack the stands of Zandvoort today to cheer on the local hero are expecting.

Alonso set the seventh fastest time, already ahead of McLaren and closely followed by Sebastian Vettel’s Aston Martin. Slight one-lap improvements from the AMR22, when that had been its weak point so far. In any case, it is a trend that what did not work at Spa does at Zandvoort, and vice versa: the fast cars on high-downforce circuits, such as Ferrari and Mercedes, have taken a step forward compared to those that swept Spa (Red Bull and Alpine, in their respective categories).

The five races that could disappear in Formula 1: GP Mexico included
Marko: “Leclerc has as many pole positions as victories we have”
Nikita Mazepin, F1 driver, recognized in the game between Pumas and Braves
FORMULA 1 2434

Loading...
Newer Post
McIlroy moves up to second in golf rankings; Rahm is still sixth
Older Post
The Southern Rugby Union and the Palihue Golf Club come together for the benefit of the FUAR