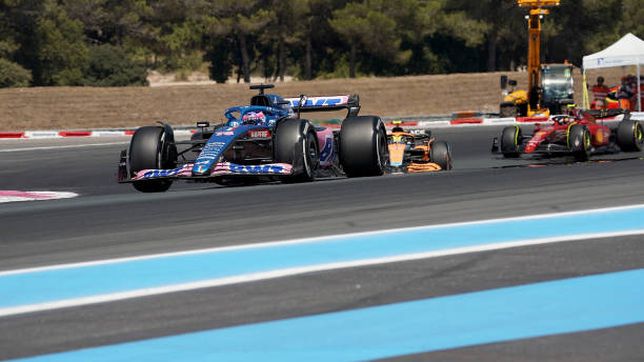 A perfect example of Fernando Alonso's career at the French GP was summed up in one of his spokes: "Don't worry, I want him to be behind me so he c

A perfect example of Fernando Alonso’s career at the French GP was summed up in one of his spokes: “Don’t worry, I want him to be behind me so he can kill his wheels.” Those wheels belonged to Lando Norris, who after the race gave his version: “I was trying to stay behind Fernando. He wanted to save the tires and push, but Fernando was so calm”.

Regarding the McLaren’s performance, Lando Norris acknowledged that he was “a little frustrated, because I expected more after free practice”: “I think I could only get between the Mercedes for a great qualifying lap, but in the race I couldn’t do anything against them, including Carlos Sainz”.

Alpine has overtaken the team from Woking in the Constructors’ Championship, something that the British driver sees as normal: “Alpine has a faster car, but they made more mistakes than us. If they have surpassed us, it is because it must be so”, said the Briton in statements collected by Speedweek.

Norris admits that Sundays are not the strong point of the MCL36: “It seems that we do better in qualifying than in the race. The balance of the car is not ideal, I lack a good front axle, which understeers too much”. Despite problems with his car, Norris is seventh in the drivers’ championship with 70 points, 51 more than team-mate Ricciardo.

“Alonso is an exceptional driver, but he doesn’t have a car to win”
Spanish GP F1 2022: This is how the Formula 1 World Championship of Drivers and Constructors goes after the Spanish GP
The romantic confession of love of the F1 driver, Lando Norris when introducing his girlfriend
FORMULA 1 1935